By ahmedon (self media writer) | 2 years ago

It's hard to argue against the fact that Eddie Guerrero made JBL's career. In 2004, Bradshaw needed a major change in his WWE career and the JBL character came to fruition.

Nobody expected that it would find the level of success that it did, but in WWE, anything can happen. In 2004, Eddie Guerrero reached the pinnacle of his career when he became the WWE Champion. 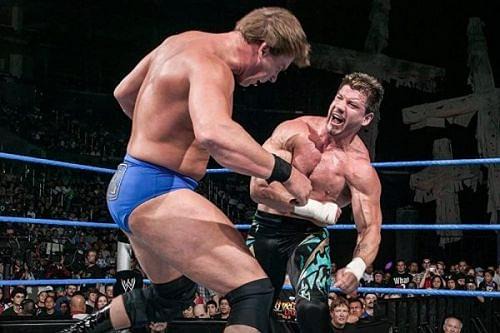 However, he was said to be an emotional person backstage and took it personally when he saw that the ratings weren't increasing while he was the WWE Champion. As a result, he asked for the title to be taken from him and that was the opportunity that WWE used to establish the JBL character.

This resulted in them facing off in two consecutive PPVs, with the Judgement Day 2004 match being considered one of the most brutal bouts in the modern era of WWE. JBL would capture the WWE Championship at The Great American Bash - starting what would become the longest WWE title reign in SmackDown history - a record he held until AJ Styles broke it in 2018.

JBL appeared on the After The Bell podcast (H/T 411Mania) and explained in detail how Eddie Guerrero made his career at the expense of his own character:

“Without Eddie, there’s no JBL. Period. JBL was a one-and-done. That was it, and Eddie wanted to prove he could make anybody. Plus, we were very, very close friends. I gave part of the eulogy at his funeral, and he was one of the groomsmen at my wedding. We were close friends and he wanted to see me succeed, and sometimes, at the expense of his own character. And without Eddie, there wouldn’t’ have been a JBL – the heart attack angle, the match in Staples Center that was so bloody, and then the Bullrope Match. Eddie was the perfect foil for JBL, but not only because it was the ultimate, rich, white conservative douchebag against this very popular Latino superstar – maybe the most popular of all time – but also because Eddie bought into it.”

Eddie Guerrero is fondly remembered among the members of the WWE locker room and the WWE Universe. His death in 2005 remains one of the most tragic moments of WWE's modern era.

His long-lasting legacy saw him influence several people including many of the current WWE superstars, some of whom are considered to be the best in the world. The case of JBL was only one example of Eddie Guerrero's selflessness and love for wrestling - something that's felt even today.