By Ademideayo1 (self media writer) | 1 year ago

For footballers playing in Europe, winning the Champions League is seen as the pinnacle of ones Career.

The two greatest players in this modern era in Messi and Ronaldo has win the competion four and five times respectively. However the Famous trophy has somehow eluded some of the biggest stars in football history.

The Italian has entered the finals twice in 2015 and 2017 but seventy list out to Barcelona and Real Madrid respectively. Due to his recent success in the Italian league and also winning the world cup, the Italian is also considered to be part of the Greatest of all time conversation.

Thutam is another former Juventus player who lost out in the finals to Ac Milan in 2003.Despite making 69 appearances in the Competition, he never won the silverware. He won the 1998 world cup and the Euro 2000 with France and two Seria A titles cementing his reputation has one of the best defenders in his position.

Despite playing for a lot of top clubs like Barcelona, Manchester United and Inter Milan he never had the chance to lift the trophy.

He's defining image came after lifting the 2006 world cup aloft. Just like some other players, he laid his hands on the ultimate international trophy but failed to lift the Champions league.

Despite playing for Real Madrid, Inter Milan and Juventus three European heavyweight, everything seemed to fall short when he was at the clubs.

Zambrotta was at Barcelona when the Catalan giants we're going through some relatively dry spell. The full back enjoyed some successful spell when he was at Juventus and Milan but like so many Italians he missed out on the Champions league trophy.

The 2001/2002 season was an immensely though year and the making of Micheal Ballack. He helped Bayern Lerverkusen become runner up in the Bundesliga, DFB pokal, Champions league as well as losing the World cup final with Germany against Brazil.

With all the near successes he had, it earned him a move to Bayern Munich which he won three league cups and cup doubles. He later went to Chelsea in which he lost another Champions league final to Manchester united in 2007/2008.

Matthaus won many awards to his name like World cup winner, German footballer of the year, world best player and so on but the German didn't have the chance to raise the Champions league trophy.

He came close in 1999 when they were just two minutes away from full time before Teddy Sheringham and Ole Gunnar Solskjaer won it for Manchester United.

Paul Nedved was one of the beat Midfielders in the modern era he made 100 appearances in European football while in Italy but he never reached the finals.

He should have been in the final of the 2003 finals against Ac Milan but missed put due yi accumulation of yellow cards.

Ibrahimovic played for seven different clubs in the champions league before leaving for MLS in 2018. The swede reached the semi finals with Barcelona but fell out with Guardiola after their loss to his former side Inter Milan.

Batistuta was arguably one of the best Strikers on the planet in the late 1990's.

The Argentine impressed with the Champions league against Manchester united and Arsenal but unfortunately they didnt go far in the Competition .

He may have been one of many great South American exports to grace European football, but in a way, there was nobody quite like Ronaldo. Even after serious knee problems threatened to curtail his career, the Brazilian scored a stunning hat-trick against Manchester United and received a standing ovation from sections of the Old Trafford crowd. 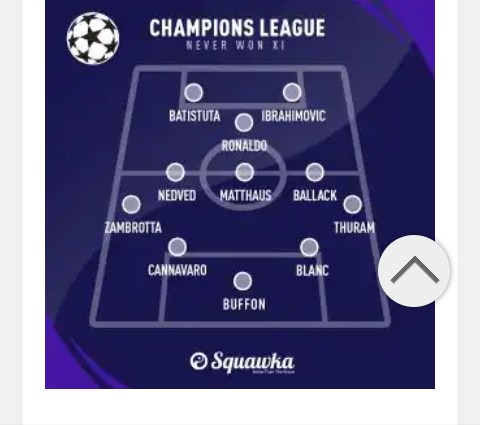