By Sportsdata (self media writer) | 2 months ago

UEFA and VAR should send an apology to Paris Saint Germain midfielder Idrissa Gana Gueye after he was on the receiving end of a career ending tackle from Manchester City's De Bruyne. Manchester City lost 2-0 to Paris Saint Germain, the game lived up to the hype as both teams are seen as having the best squads, going into the game both Mauricio Pocchettino and Pep Guardiola named a very strong squad, but it was the Lionel Messi led stars that secured all three points, top stars like Grealish, De Bruyne and Sterling all started the game for Man City while PSG started the trio of Lionel Messi, Neymar and Mbappe. 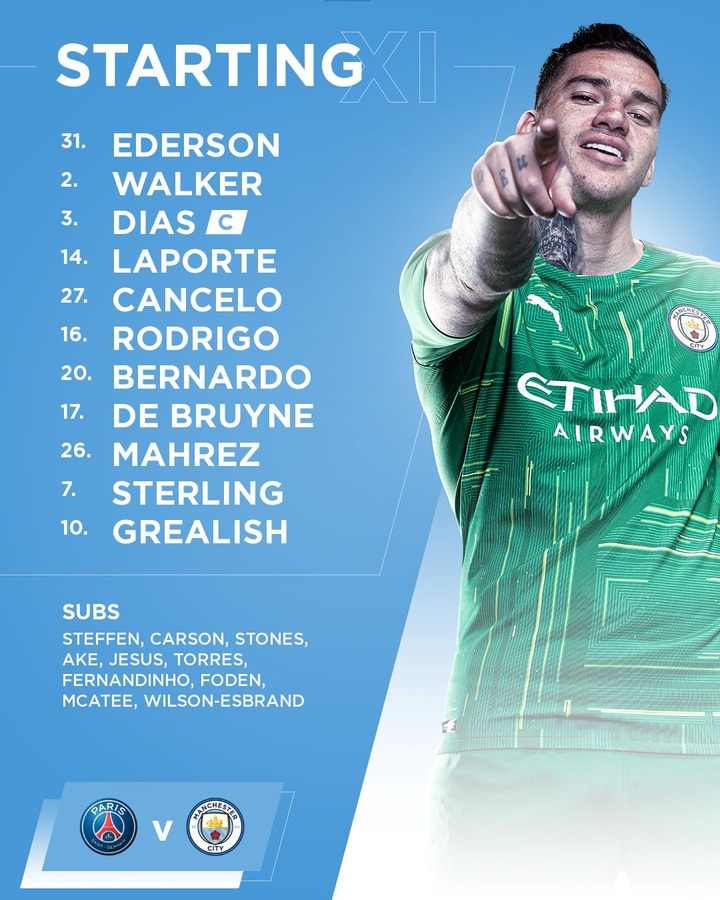 Gana Gueye opened the scoring with just 8 minutes on the clock, the first half ended in a 1-0 victory for PSG, the second half of the game saw Lionel Messi scored his first goal for PSG in the 74th minute, after 90 minutes PSG won the game 2-0, but the game was marred with a very poor decision from the referee.

In the first half of the game Kevin De Bruyne lunged into a tackle as he tried to win the ball but he ended up stamping Idrissa Gana Gueye, the referee only cautioned De Bruyne but in my opinion he should have been red carded and possibly banned for a couple of games.

Different angle views show a very dangerous tackle from De Bruyne, the tackle is worthy of a red card. 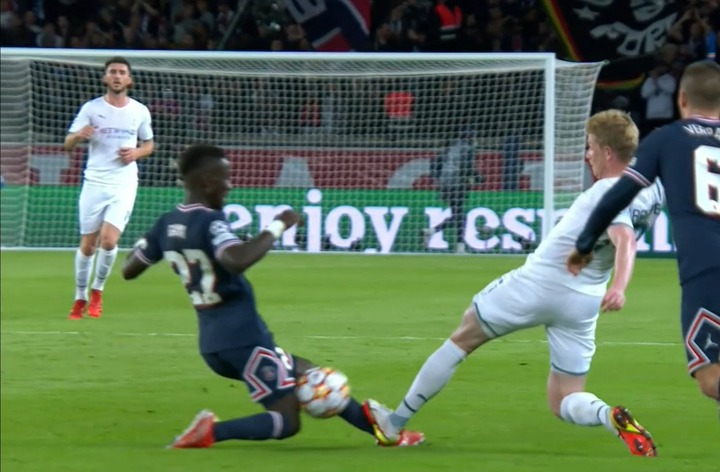 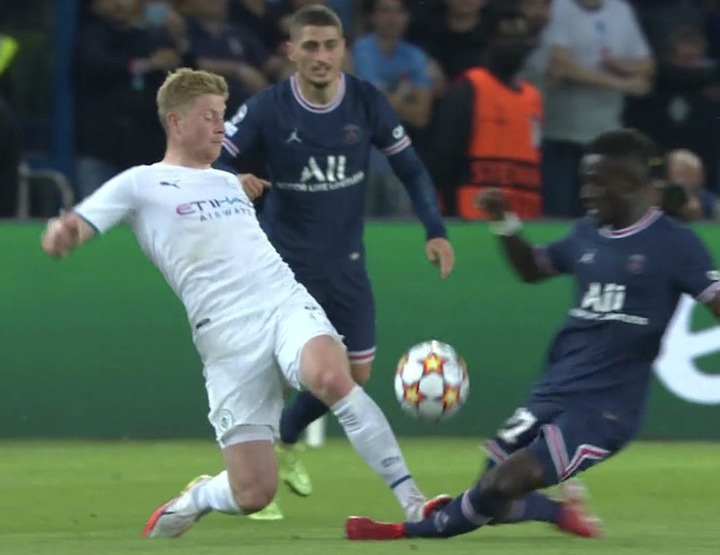 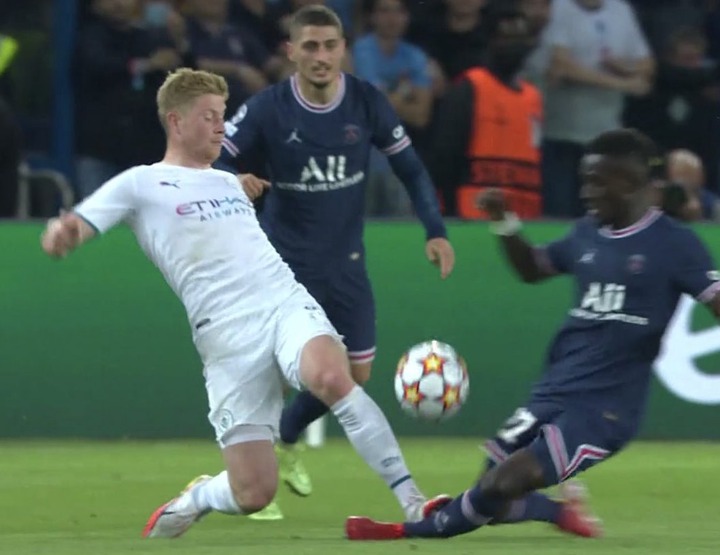 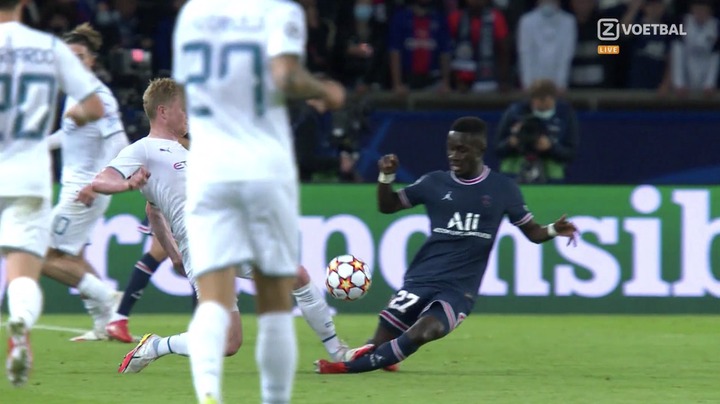 Gana Gueye will definitely be wondering why Kevin De Bruyne wasn't shown a straight red card, especially after he was shown a red card for a similar tackle on Bernado Silva, although the incident happened in a previous meeting but he wasn't shown the leniency the referee showed the referee and VAR showed De Bruyne today.

A similar tackle also happened in the Man United vs Young Boys game and the culprit was shown a red card, Wan Bissaka was show a straight red card after he stamped the opposition player. 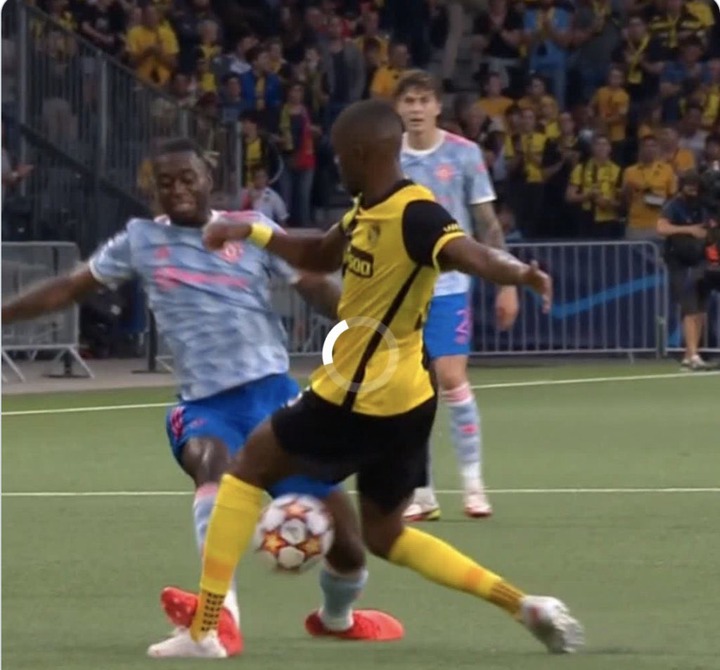 So why was Kevin De Bruyne not red carded, well we will have to leave the explanation for the referee and VAR, but for now UEFA and VAR should send an apology to Gana Gueye.