The London giants are reportedly among the main contenders to seal the transfer of Real Madrid playmaker and Arsenal loanee, Dani Ceballos, this summer. Arsenal are also keen to sign Spain international on a permanent basis, but they face competition from their PL rivals Blues and Man City.

The report adds that Los Blancos will accept offers of nearly €30m for Dani, and that seems a very tempting price for such a quality player. Ceballos has had his ups and downs in a Gunners shirt, but there’s the sense that he could improve next campaign if he can have a bit more luck with injuries.

As well as that, the 23-year-old midfielder would surely shine in a better side, so could, therefore, do well to link up with Frank Lampard at London club. The Spanish midfielder could be an upgrade on the likes of Ross Barkley and Ruben Loftus-Cheek in midfield, and Chelsea supporters will surely feel he’d be a bargain for £28m.

Gunners would be disappointed to miss out, however, having had the player on loan this term. Chelsea have perhaps not been at their best by their own high standards this term, but Frank has the team closing in on fourth place, and has already strengthened with promising additions in Timo Werner and Hakim Ziyech.

With all eyes on Blues and whether they can acquire Bayer Leverkusen star Kai Havertz after already securing Timo Werner and Hakim Ziyech, Chelsea have begun to look for ways to fund any move for the German playmaker. 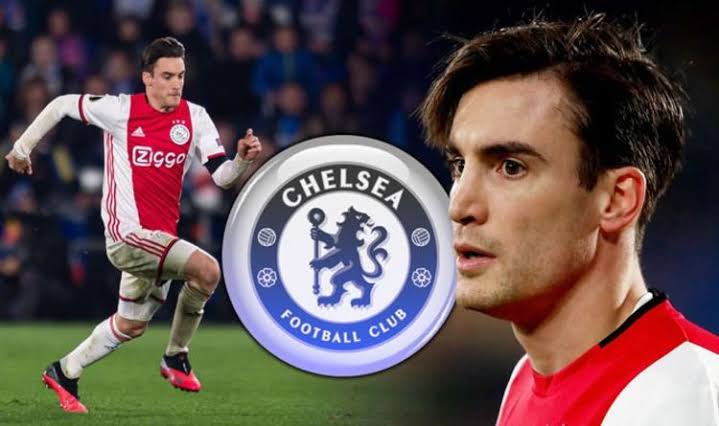 Chelsea are still monitoring Ajax left-back Nicolas Tagliafico but they face competition for the 27-year-old from Atletico Madrid, according to a report. The Blues are also interested in Leicester's Ben Chilwell.

Rio Ferdinand predicts who will make top four out of Man Utd, Chelsea

But Chilwell is thought to be priced at around £80-90million by Leicester, who aren't willing to sell.

Chelsea will reportedly look to drive the price down, but according to the Sun, Tagliafico is still on their radar.

The Sun also state, however, that Atletico are in the running for his signature too. Chelsea boss Frank Lampard has confirmed that N’Golo Kante will not be fit to feature in his side’s clash with Manchester United.

The FA Cup is of course set to get back underway this weekend.

And this will be followed by another highly-anticipated clash between two of English football’s biggest clubs, when Chelsea and Manchester United go head-to-head on Sunday evening.

Both sides are set to the Wembley showdown in 2 days’ time on the back of midweek victories, in their respective pursuits of a top-4 berth.

First, a solitary strike from Olivier Giroud saw Chelsea past a plucky Norwich at Stamford Bridge.

And Manchester United also kept their hopes of Champions League football alive last night, when the Red Devils got the better of Crystal Palace in London.

Significantly, it should be noted that Chelsea’s latest outing came on Tuesday, meaning Frank Lampard’s men are set to have an extra 48 hours of recovery time before Sunday’s semi-final clash. Frank Lampard says he is very much looking forward to Chelsea fans being able to attend matches again.

With the season having been suspended because of the coronavirus pandemic and then resumed with games played behind closed doors, supporters have not been admitted to matches since March.

The government currently plan for that to change in October – and Blues boss Lampard has welcomed the news.

“I’m very excited to welcome our fans back,” he said.

“It’s not just our fans. I think the country are craving for fans to be back at games because of the atmosphere and what the game means here.

“If and when it’s done in the right way, with the right precautions – and I think football has made some great steps in a difficult situation – we can get our fans back in the stadium.”