Why Dani Ceballos should be Arsenal's top transfer priority this summer

It's set to be an important summer for Arsenal, with the announcement made today that the Premier League transfer window would run from the close of this season on July 27th until October 5th, with an extension for deals with clubs in the EFL.

Following the Gunners' defeat to North London rivals Tottenham at the weekend, it appears that their best route into Europe would be by winning the FA Cup. However, Mikel Arteta has this week played down the importance of European football when it comes to recruiting top players.

In his press conference ahead of the match against Liverpool, the Spaniard was quizzed on the subject and stated, "If you are not in the Champions League and you say: ‘OK, I don’t invest because I don’t have the financial ability to do it’, but the other clubs invest, then the gap becomes bigger."

"I'm telling you now because when I am closer to the market now when I speak to people, a lot of players want to play for Arsenal."

Arteta is hoping that one of said players is already among his squad, with the club's stance on the future of loanee Dani Ceballos becoming far more clear. So too is that of parent club Real Madrid, it seems, with Marca claiming they would be happy to part with the midfielder on a permanent basis for a fee of 25m euros.

It's a price tag that seems unlikely to put Arsenal off, but that is also true of interest from within LaLiga, particularly from Valencia and former club Real Betis. It was with the latter that Ceballos made a name for himself as a very unique midfielder. An elegant passer but also one that could carry the team forward with his dribbling and break up play with his tackling.

Such a concoction of skills drew interest from Real Madrid, but it was perhaps a move that came too soon for the then 20-year-old. Still just 23, despite featuring for Spain on since his move to the Bernabeu, Ceballos was unable to break the hold of mainstay trio Casemiro, Luka Modric and Toni Kroos on the Madrid midfield, and the club now hold youngster Federico Valverde in extremely high regard.

As such, Ceballos is effectively deemed surplus to requirements, but after a challenging first season in England, the midfielder is beginning to prove his worth under Mikel Arteta. For a player to have started just 17 league matches in two years to take time to adapt to the Premier League isn't surprising, and injuries haven't helped, but it's not long since Ceballos was being labelled a flop.

His post-lockdown haircut could be described as much still, but his performance on the pitch and influence on this evolving Arsenal side is undeniably improving. After an impressive initial performance for the London club, Ceballos seemed to hit a wall that, in truth, multiple others did under Unai Emery.

To say he looks more comfortable and confident now is an understatement. He has an increased responsibility, operating from a deeper position that allows him to be more involved and utilise his vision to encourage a more progressive approach play from the back. In truth he's being asked to do less of what he did best as a youngster in terms of carrying the ball and tackling and more when it comes to showing for the ball off the defence and picking out forward passes. 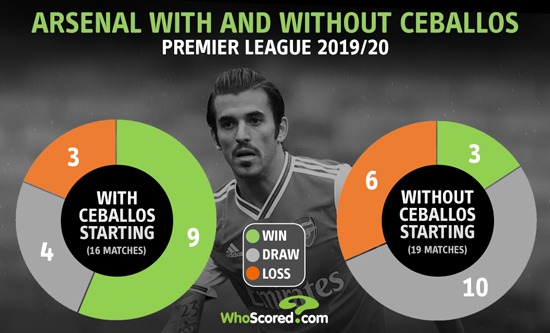 His impact upon results has been clear to see and was actually evident prior to Arteta's appointment. From the 16 league starts that Ceballos has made this season, Arsenal have won nine and lost just three. That's in stark contrast to the 19 league matches the Spaniard has not started, with Arsenal winning only three and not only scoring but conceding fewer goals per game.

In that sense he is becoming an integral player to the way that Mikel Arteta wants to play and as such, it is no surprise that the rookie coach wants to keep hold of his compatriot. Should Arsenal miss out on Ceballos, Arteta will need to start from square one and while new faces at the Emirates are a must, ensuring they keep hold of a familiar one should be among the club's top priorities.