The English FA Cup as we all know, is the oldest national football competition in the world, first played during the 1871-1872 football season in England. Till date, it is one of the most prestigious and highly competitive tournaments in world football.

The FA Cup holds annually, and its not just for the elite English clubs, but it cuts across all the levels of club football in England.

The tournament has always been known to be characterized with regular cases of surprises, where the underdogs in a match, most times end up winning the match. Such a case of an underdog carrying the day, is in the match between two English football 'big boys', Arsenal and Manchester City, in the FA Cup semi final first leg.

Arsenal, popularly known as the gunners, where before the match branded the underdogs by many football fans and pundits, owing to their current poor run of form in their domestic league, where they currently sit in a distant 10th position after 36 matches, against their opponent, who are comfortably occupying the 2nd position in the league, after same number of matches. But tonight, we saw a different story, as pierre-Emerick Aubameyang, who has been the clubs leading scorer for the season, stepped up to the big party once again, as his two goals ensured that his side dumps the high-flying Manchester City out of the competition, thereby securing their place in the finals of the competition 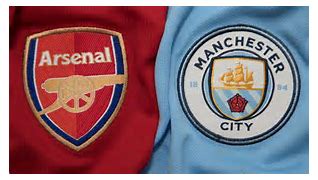