It isn't exactly a secret that pro-wrestling is a demanding business. It needs a Superstar to be on their toes for the better part of a year. The hectic schedule that comes with being a WWE Superstar isn't something that everyone can handle. One has to constantly travel on the road from one show to another and perform in front of the WWE Universe on a weekly basis, sometimes on several shows.

Here's where friendships blossom between WWE Superstars. Like-minded individuals who are in the same situation generally tend to form bonds that last a lifetime in some cases. In this slideshow, we will take a look at three real-life friendships in WWE. Also, we will highlight three on-screen friendships in WWE that were formed to advance storylines on TV and the pairs weren't close in real life.

Both Nia Jax and Alexa Bliss have done well for themselves on the main roster. These two women have feuded with each other as well over the RAW Women's title in 2018. Their feud culminated in a RAW Women's title match at WrestleMania 34, which ended with Jax winning the belt. Bliss soon cashed in her Money In The Bank briefcase during a title match pitting Jax and Ronda Rousey at the namesake PPV, ultimately winning the belt back.

Jax and Bliss are very close in real life and the former values the bond so much that she once complained to WWE's higher-ups when she found out that former RAW Women's Champion Ronda Rousey was hurting Bliss in the ring.

"I was like, 'no she cannot do this anymore. I personally would not allow her to get back in the ring to get hurt again', and I had to go to the people, to the higher-ups, and tell them, 'listen, Lexi is five foot nothing, a 100 pounds, getting thrown around like a little ragdoll and injured every night.' I was like, 'Put me in, I'm a 6 foot, 300-pound bi**h and I can handle it'.

It's incredibly wholesome to learn that Jax is ready to go to any length to protect her friend. The duo's friendship has been heavily featured on WWE TV as well as on Total Divas, and hopefully, it only blossoms over time.

Back in 2013, The Wyatt Family made its way to WWE's main roster after a brief stint on NXT. The faction consisted of the leader, Bray Wyatt, Luke Harper, and Erick Rowan. The trio immediately attacked Kane upon its arrival and Wyatt went on to defeat The Big Red Machine at WWE SummerSlam 2013.

Years later, Harper appeared on E&C's Pod of Awesomeness and made a surprising revelation in regards to his on-screen association with Rowan. Harper stated that he and Rowan didn't like each other one bit, back when they were paired together in 2012. The duo knew that they needed to somehow get along for the sake of their on-screen characters and their overall careers.

Both Superstars had memorable stints as part of The Wyatt Family and later dominated the SmackDown Tag Team division as The Bludgeon Brothers. Harper was granted his release from WWE in December 2019. Rowan, on the other hand, was released along with several Superstars in April, as a cost-cutting measure amidst the coronavirus pandemic.

AJ Lee is widely regarded as one of the flagbearers of WWE's Women's Revolution. She, along with Paige, did her bit towards making women mean something in WWE and the subsequent events led to women finally headlining the main event of WWE WrestleMania.

Back when Lee was a mainstay in WWE, she had a brief stint with Dolph Ziggler and Big E. Turns out, Lee and Big E were close friends in real-life and still are.

Fans might remember an incident that happened while Lee, Ziggler, and Big E were making their entrance to the ring. While Big E violently swung his arms during the entrance, he accidentally hit Lee, who handled it like a pro and carried on with her entrance as if nothing had happened. Lee once revealed in an interview that she later pretended that she had been legitimately hurt during the entrance, in an attempt to have some fun at Big E's expense.

He was on the verge of tears and was like 'What can I do? Are you okay?' and so I thought it would really - you know, to be a really good friend - I was like 'let me make him feel so bad about this.

Big E and Lee's real-life friendship has given us a bunch of memorable moments, on-screen as well as off-screen. The duo has exchanged amusing birthday wishes in the past and has nothing but respect for each other.

Back in 1990, Hulk Hogan was still a major Superstar and a living legend in WWE, but another big name was steadily making his way to the top. The Ultimate Warrior was regularly getting big pops from the WWE Universe and many felt that he would be the one to replace Hogan as the face of the company.

At WrestleMania 6, Warrior defeated Hogan to win the WWE title and it seemed like WWE had ushered in a new era. Warrior's run as the face of the company didn't last as long as Hogan though, mainly due to several backstage differences between him and Vince McMahon.

At one time, Warrior and Hogan were two of the most dominant forces in all of WWE and formed an alliance to take on Col. Mustafa, General Adnan, and Sgt. Slaughter at SummerSlam 1991. The duo defeated the villains to send the fans home happy.

Warrior and Hogan went on to berate each other on various occasions over the next two decades or so. Hogan was one of several Superstars who made fun of Warrior in "The Self Destruction of The Ultimate Warrior" DVD. Warrior bashed Hogan online on various occasions as well, but the two made amends during WrestleMania 30 weekend, even though Warrior didn't hesitate to let Hogan know that his words had hurt him a lot. 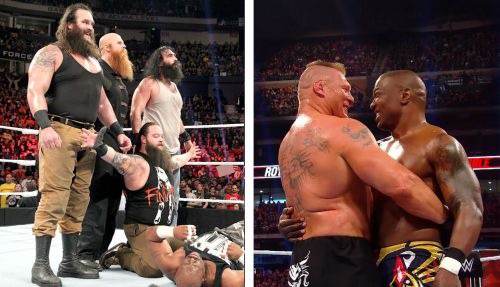 Brock Lesnar made his way to WWE's main roster in the spring of 2002, immediately after WWE WrestleMania 18. Lesnar had been a mainstay in Ohio Valley Wrestling for a brief period before he was promoted to the big leagues.

Back when Lesnar was in college, he was reportedly roommates with Shelton Benjamin, who was also The Beast's assistant coach at the time. While talking about Lesnar on Lilian Garcia's podcast, Benjamin had nothing but praise for The Beast Incarnate.

“When I met Brock, instantly I liked the guy. He was just a big fun loving dude.”

“We’re pretty good friends. Career paths have split us a bit.... For me, it was a situation where he’s doing his thing and doing very well at it, but I need to focus on me.”

Lesnar and Benjamin locked horns on several occasions back in 2003, while the latter was aligned with Kurt Angle and Charlie Haas. The duo faced off during the 2020 WWE Royal Rumble match earlier this year. Lesnar, while initially hinting that he would team up with Benjamin to eliminate other Superstars, suddenly turned on the latter and eliminated him from the match.

Back during the late 90s, Hulk Hogan was the sole face of the company, while Randy Savage was steadily gaining popularity among the WWE fans. Savage's big moment came in the main event of WrestleMania 4 when he defeated Ted DiBiase to win the WWE Championship. He soon formed "The Mega Powers" with Hogan and the babyface duo ran rampant over a bunch of heels over the next several months.

Portrayed as very close allies in storyline, Hogan and Savage weren't close in real-life. Back then, Hogan and Savage had a real fight while WWE was on a tour to Paris. Over the next several years, Savage bashed hogan on various occasions and even went as far as to say that Hogan was responsible for his divorce with Elizabeth.

Unfortunately, Savage passed away after suffering a heart attack while driving his jeep. The cause of Savage's death was later determined to be atherosclerotic heart disease. Years later, Lanny Poffo revealed that Savage had reconciled with the Hulkster about a month before his untimely passing.