The Craziest World Records OF All TIME! (See Photos)

Getting your name in the history books isn’t easy, but breaking a world record is one way to ensure that people will remember you forever. For these guys breaking a record just wasn’t enough, they had to complete the most dangerous or outlandish feats imaginable. Here is our list of the top 7 craziest world records people have broken.

This might come as a surprise to some people, but often it’s the most unpleasant world records that end up being the most competitive. For example, Wim Hof, a Dutch athlete also known as the ice-man, held onto his record for longest full body contact with ice for years – upping the time and beating his own record over 16 times. By the end, he’d managed to stay submerged in ice for a crazy time of one hour and 53 minutes, which he said he could do thanks to his secret breathing technique.

However, in 2014 he was forced to finally hand his title over when he was beaten by Jin Songhao. Jins time was only 8 seconds longer than Hof’s, but it was enough to take the record, and finally beat the Ice-Man at his own game.

With that said, Hof has some other ice-cold records to fall back on – as he’s still the fastest person to run a barefoot half marathon on snow or ice. As for how fast, he completed the whole race in 2 hours, 16 minutes and 34 seconds -probably because he was in such a hurry to put his shoes back on!

Here’s a weird fact to end on: staying in full body contact with the snow is way harder than it is for ice and the holder of that record Oleksiy Gutsulyak who only just managed to make it past an hour.

I’m guessing it’s because of the gaps between the ice that provide some sort of insulation you don’t get with snow.

6 – Most Watermelons Smashed With The Head In One Minute

This is another record that may sound silly at first, but the amount of dedication it takes is no joke. Breaking the record for smashing the most watermelons with the head in one minute is surprisingly popular. You can find a fair few failed attempts on YouTube if you feel like looking them up. 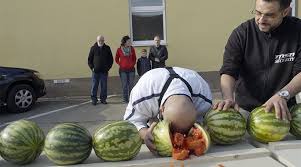 With that said, the actual title belongs to 50-year-old Ahmed Tafzi from Germany, who managed to smash 43 melons open before the clock hit 60 seconds. His practice strategy might surprise you too, as he had trained with wooden blocks and even bricks before.

That aside, he’s not the only person with a martial arts background drawn to this kind of challenge. 41 year old Lisa Pitman holds the women’s record for most roof tiles smashed in one minute, managing a crazy total of 923. 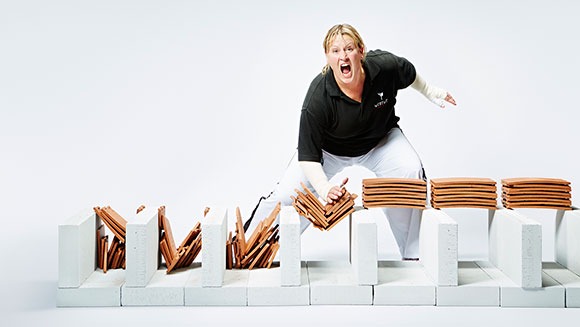 Even better, her husband holds the matching men’s title, and the two attempted to break their records together live on TV. Lisa failed her first attempt, and when her husband proposed live on air, she said yes but that she wouldn’t marry him until she broke her record too. Luckily she managed it, and is now happily married.

Juggling is a pretty common skill, in fact, I bet everyone watching knows at least one person who can do it well. However, no matter how good at juggling, they think they are, I doubt they’d be able to take on this particular challenge.

Ian Stewart is a record holder famous for completing the most throws and catches while juggling something pretty special – three totally active chainsaws. He managed 94 catches in all and has been practicing ever since he bought his first chainsaw at just 18.

Not just that, but he’s confident he could break the record and go even further – he’s just waiting for someone else to challenge him first.

Speaking of chainsaws, you know how I mentioned stuntman The Space Cowboy earlier? Well, his own chainsaw trick is just as incredible, and maybe even a little harder to watch. He snatched the record for most apples held in his own mouth and cut by chainsaw in one minute, and to top it all off he completed the challenge whilst blindfolded. He managed to chop up 21 apples overall but, most importantly, he walked away with his nose intact!

4–Highest Waterfall In A Kayak

Kayaking over super dangerous and risky stuff like super tall waterfalls is another record I had no idea was so competitive, but it has a pretty intense history all of its own.

Tyler Bradt kicked things off in 2007 by kayaking over the Alexandra Falls on the Hay River, falling over 107 ft or 33 m before hitting the water.

Bradt didn’t take long to retaliate, as he snatched the record back just a month later, and this time managed to keep it. Bradt chose the Palouse Falls as the perfect site for the record, as it is 17 ft or 5.2 m taller than Niagara Falls.

Originally his record-breaking fall was said to measure 186 ft, but since then estimates have risen even more. The relevant authority now accepts that Bradt fell an incredible 189 ft before finally hitting the water. This feat earned him a spread in Sports Illustrated as well as the Guinness book of world records.

Normal diving already takes a whole lot of skill and bravery, that’s why it’s an Olympic sport, but canyoning takes things to a whole new level.

Brazilian born Laso Schaller has been jumping off cliffs for his whole career, but his average dive was between 25 and 35 meters. In order to set a world record for the highest ever cliff dive, he had to almost double that number, and jump from a height of 58.8 m.

To do it, he chose to leap from the famous Cascata del Salto waterfall in Switzerland, and several safety measures had to be taken. Six tanks had to be placed in the pool he would be landing in to soften the water, and a special high dive platform had to be built before he dove.

In the end, he broke the record, but missed the landing zone, and plunged into the harder water at 123 km/h. Thankfully, he did not get any injury. However, assistants present there had to drag him from the water. He had to spend several moments on his knees before celebrating his victory.

There aren’t many sports more dangerous than cliff-jumping, but there is one very similar act that is even more dangerous. Shallow diving involves jumping from great heights into incredibly shallow water. The current world record holder is Darren Taylor but he calls himself ‘Professor Splash’. The professor set a new record back in 2014, when he dove from a height of 11.56 m into just 12 inches of water!

Daredevil Freddy Nock is no stranger to breaking records, but I think this may be the most terrifying yet. Back in 2015, he snatched the title for the world’s highest ever high-walk, when he walked unsupported across the Swiss peaks on a tightrope.

His wire was less than an inch thick. He walked across it without taking the help of poles or other equipment, despite the 50m altitude difference between both ends. He started 3532m above sea level and eventually reached Piz Prievlus, a mountain with an elevation of 3,501m.

This smashed the previous record, which had been held for 30 years when Philippe Petit walked between the two towers of the World Trade Centre.

However, the record for highest tightrope balloon walk belongs to Mike Howard, who walked along a 19 ft pole at 4000 ft. Now that takes high wire talks to the extreme! Not only that, but he performed it blindfolded, and finished the trick by parachuting to the ground.

Most people who try to break a world record don’t mind the attention. However, Google Vice President Alan Eustace tried to avoid it at all costs.

When he broke the record for highest ever freefall jump, he didn’t inform the media until afterward, and declined Google’s offer to help him with equipment. Instead, the Google VP worked on the project independently for three years, finally taking the record in 2014.

Felix Baumgartner held the previous record, who gained it with the help of Redbull. Unlike Eustace, he welcomed the attention as eight million people watched live on YouTube. He became the first person to ever break the sound barrier when he fell from 127,852 feet.

By comparison, Eustace fell a shocking 135,908 feet from the edge of space. He returned to earth at a speed of over 800 miles an hour. The trip up to his launch site allegedly took over 2 hours, while his trip back took an incredible 15 minutes. Some even reported hearing a sonic boom as the Google employee raced back to Earth. Now he’s one cool computer scientist!

Which world record did you think was the craziest? Let me know in the comments section down below.