Rick Ucchino of Sportskeeda asked Braun Strowman about his honest thoughts on his unplanned Universal Championship reign. He explained how he took the opportunity and the feeling of defeating a man he idolized in Goldberg: 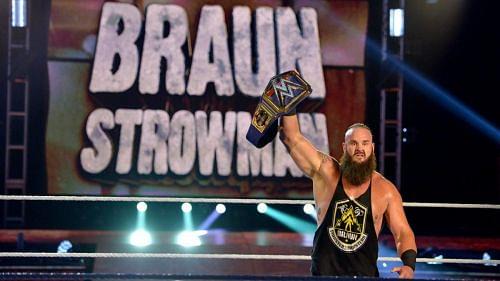 "It was an opportunity, for one. It was an opportunity that I initially wasn't going to have. Due to circumstances that have happened with the company, they called my number. When the company gives me an opportunity I make the most of it - and that's what I did it that night defeating Goldberg for the Universal Championship. A guy I idolized, still to this day - watched his moves and mimic them as a teenager. The opportunity of sharing the squared circle with a WWE Hall of Famer and icon Bill Goldberg was amazing in itself, but raising the Universal Championship over my head and proving to the world and the people told me I would never hold the title. It's so humbling to shut up people that doubt you. I think my reign as Universal Champion, for what it was in such short notice, I stepped up and did my job."

Braun Strowman explained that he was given a massive task in the middle of a pandemic and felt that he did a great job given the circumstances:

"In the middle of the pandemic, I wasn't supposed to be in that position. But the company strapped itself on my back and I carried the company through all this. I put my well-being on the line to come to work and entertain our fans. At the end of the day, there are people all over the world looking for an escape, for a way to forget about what is going on in real life and the world. If I had the opportunity to take their minds off even for 30 seconds, then I did my job. I will stick to my word - I am honored and I think I did a damn good job as Universal Champion."

How will Braun Strowman's reign as Universal Champion be remembered?

While Braun Strowman's reign as Universal Champion may not have set the world on fire, it likely had to do with the entire creative and booking of his reign. As he mentioned to Rick Ucchino, it was entirely circumstantial and from not having a match on the WrestleMania card, he had to carry the SmackDown brand during one of the most unique periods in WWE history.