By Ernyfred (self media writer) | 10 months ago

Qualification match fixtures for the upcoming FIFA World Cup are currently being played by countries in their respective continents and this saw the German national football team play against Armenia in Group J of the UEFA World Cup Qualifiers. 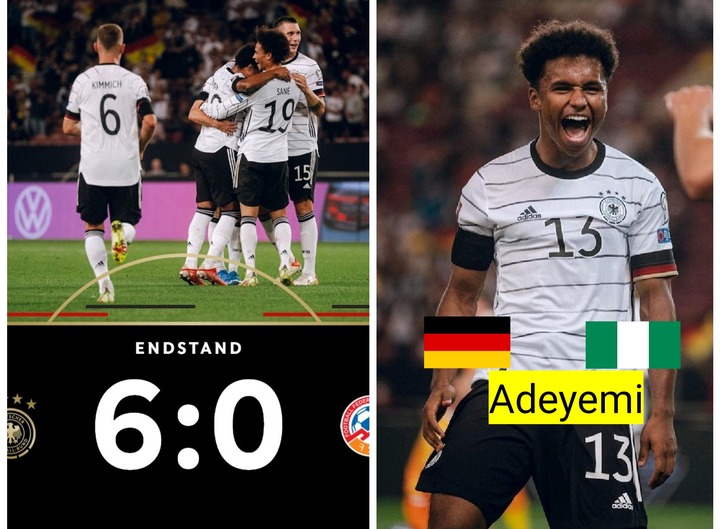 The Germans won their opponents with an impressive 6-0 scoreline and are currently top of their group table with twelve points and eleven goals difference. In this article, we will be talking about one of the German national football team's youngest players that shined in the match. 19-year-old Karim Adeyemi is a European professional footballer that plays as a striker for the German national football team and FC Red Bull Salzburg. The club has a reputation for being one of the biggest football clubs in Austria and they play in the country's top-flight domestic football league, called the Austrian Bundesliga. Karim has an impressive record of scoring 18 goals in just 61 appearances for Salzburg. Though he was born in Munich, Germany, and chose to play for Germany's national football team, Adeyemi is originally from Nigeria. The 19-year-old footballer was born to a Nigerian father of Yoruba descent and a Romanian mother.

The Yorubas are known to be one of the largest ethnic groups in the West African country Nigeria. The name Adeyemi also originates from the Yoruba tribe and means "The crown befits me" when translated into the English language. Adeyemi was brought in as a second-half substitute to replace the Bayern Munich star Serge Gnabry in the 72nd minute of the match.

The World Cup Qualifiers match against Armenia was the footballer's international debut game for the German national football team and he impressively scored Germany's sixth goal despite spending less than 20 minutes on the pitch.

There's no doubt Adeyemi has a very bright future as a professional footballer judging from his debut performance for Germany.