See why Zidane Has to quit Real Madrid Now or else

By Godwinenakhena (self media writer) | 1 year ago 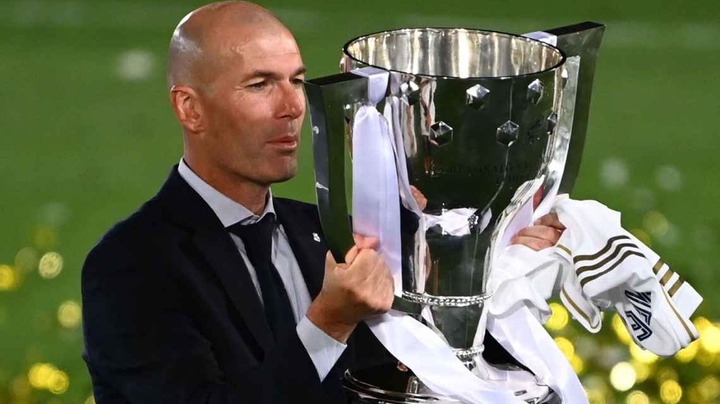 Lambasted by many for rescinding his earlier decision to quit Real Madrid in 2018 after winning the UEFA Champions League thrice consecutively and not forgeting La Liga titles, Zinedine Zidane just proved again that he is no fluke and that he is arguably one of the best coaches in the game.

It is not always about how long one has been in the coaching business but trophies. This is what counts in today's multi-billion business called football.

Job done but it's about time he takes the tough decision of telling Florentino Perez, the Real Madrid supremo that he's completed the rescue mission job and it's time to chase other dreams. Tough you'll say but this is the wisest option he's got right now because Barcelona will be all gun blazing next season. Inevitably, Barca will get the best players for the La Liga battle and Neymar is on his way back home. Not even Covid-19 can stop this. There will be money somehow to make this happen.

What would be Zidane's motivation next season? What more has he got to prove to anyone? Of course, there will be an exodus of key players from the Bernabeu in a few days and the rebuilding process would begin. 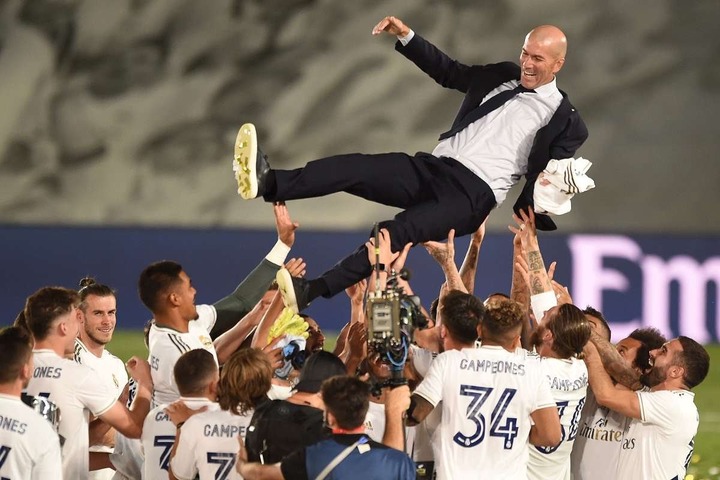 If you still think Zidane should start, please kindly go through this rich CV and tell me why.

On 4 January 2016, Real Madrid announced the dismissal of manager Rafael Benítez and on the same day Zinedine Zidane was moved from the B team and appointed the new manager of the club on a two-and-a-half-year deal.

His first match as the club's new manager took place five days later, when Real Madrid beat Deportivo La Coruña 5–0 in a La Liga match. In his first El Clásico as a manager, held on 2 April at the Camp Nou, Zidane led his club to a 2–1 win over Barcelona to end Barça's 39-match unbeaten run. On May 4, Zidane led Real Madrid to a place in the 2016 UEFA Champions League Final by beating Manchester City 1–0 on aggregate. In La Liga, Real Madrid finished runners up, just one point behind Barcelona. In the Champions League final on 28 May, Real Madrid defeated fellow Madrid club Atlético Madrid in a penalty shootout to grab the 11th European Cup (La Undécima) in club history. Zidane became the seventh man to win the European Cup (now UEFA Champions League) as both a player and a manager, the second man (after Miguel Muñoz) to win the trophy with Real Madrid as both a player and a manager, and the first French manager, except the French-Argentinian Helenio Herrera, to win the trophy.

In his first full-season as manager, Real Madrid recorded a club-record 16th consecutive La Liga victory by defeating Espanyol 2–0 away on 18 September 2016, overtaking their previous record of 15 set in 1960–61 and equalling the record of consecutive La Liga wins of Barcelona set in 2010–11. On 18 December, Real Madrid defeated Japanese club Kashima Antlers 4–2 in the final of the 2016 FIFA Club World Cup, with Cristiano Ronaldo scoring a hat-trick.

On the 12th of January 2017, Madrid's draw against Sevilla FC in the second leg of the Copa del Rey round of 16 saw him win his 40th consecutive match without a loss – creating a new Spanish record, beating Luis Enrique's record of 39 matches undefeated with Barcelona. Zidane later led Madrid to the La Liga title, their 33rd in history, by defeating Málaga 2–0.

On 3 June 2017, Zidane led Real Madrid to a 4–1 win against Italian side Juventus in the 2017 UEFA Champions League Final at Cardiff to grab the club's 12th European Cup (La Duodécima). This victory meant that Madrid were the first ever team to win the Champions League back-to-back, as well as recording Zidane's first double as coach, and the club's first since 1956–57. With Real's Champions League victory, Zidane became only the second manager to win the European Cup in his first two seasons in management, alongside fellow Real Madrid manager José Villalonga. He later won the 2017 UEFA Super Cup 2–1 against Manchester United on 8 August. This meant Zidane was the first manager to win two UEFA Super Cups in a row since Arrigo Sacchi's Milan in 1990. Five days later, Real Madrid beat Barcelona at the Camp Nou 3-1 in the first leg of the 2017 Supercopa de España. Three days later, Real won the second leg 2–0, 5–1 on aggregate, while ending Barcelona's consecutive scoring record in El Clásico. This title tied Zidane with Vicente del Bosque as the third most successful Real Madrid manager with 7 titles, one short of Luis Molowny, but still 7 away from Miguel Muñoz. This also meant, that at the time, Zidane had won as many titles in his managerial position in Real Madrid as games lost during his tenure. Zidane's success saw him named Best FIFA Men's Coach in 2017. In December 2017, Zidane won his eighth trophy as manager when Real defeated Grêmio in the 2017 FIFA Club World Cup in the United Arab Emirates. On May 26, Zidane won the Champions League for the third time in a row, beating Liverpool 3–1 in the final. He became one of three managers, alongside Bob Paisley and Carlo Ancelotti, to win the European Cup three times, while also becoming the first manager to win the trophy in three consecutive seasons.

On 31st of May, five days after the Champions League Final, Zidane announced his resignation as Real Madrid manager, citing the club's "need for change" as his rationale for departing.

Following some poor results for Real Madrid in the months following Zidane's departure – culminating in elimination from the Copa del Rey's semi-final stage at home to Barcelona, a league loss to the same opponent at the same venue which opened up a 12-point gap between the clubs, and an unexpected home 4–1 defeat to Ajax in the Champions League which brought the long run of success in that competition to an end, all within the space of a week – his former teammate Santiago Solari (who himself had only been in the post for five months, after Julen Lopetegui's equally brief spell in charge) was dismissed and Zidane returned as the Real Madrid head coach on 11 March 2019, on a contract until summer 2022.

Content created and supplied by: Godwinenakhena (via Opera News )