La Liga: Araujo Equalizes For Barcelona With A Superb Heading

The match between Barcelona and Granada was really a tough match. The match began by 8pm at Camp Nou. In the early minutes of the match Granada scored with a superb heading. The goal scorer; D. Duarte scored with a wonderful heading and gave Granada the lead. Barcelona began pressing hard for a goal in the first half but Granada defenders were really defending their net. 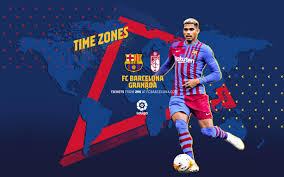 The second half began and Barcelona kept struggling to get an equalising goal. Araujo kept nodding set pieces but Granada's goal keeper kept making wonderful saves. Some players were substituted and some players went on injury. 90 minutes of the game, the defender of Barcelona named Araujo made a wonderful heading of the ball into the net of Granada's. His goal was assisted by Dest.

At the end of the match, Barcelona and Granada made 1 points each in the league results. It was really a wonderful match.

Content created and supplied by: Nero33 (via Opera News )