Thibaut Courtois has accused football's regulatory bodies of putting money ahead of the welfare of players, whom he believes are treated like "robots." 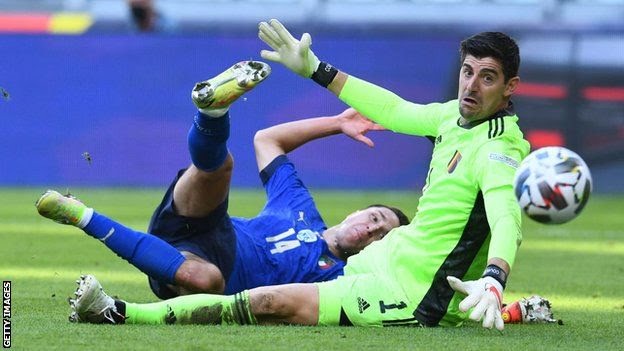 During the current international break, the Real Madrid goalkeeper appeared in both of Belgium's Nations League games.

This includes Sunday's third-place play-off against Italy, which drew criticism from the 29-year-old.

He told Sky Sports, "This game is essentially a money game; we have to be honest about it."

"We just play it because it is extra money for Uefa and an extra game to watch on TV.

But look at how much both teams' lineups altered - if we'd both made it to the final, there would have been more people on the field."

Eden Hazard and Romelu Lukaku were two of the players who did not play in Sunday's game, which Italy won 2-1, due to muscular problems. They had played in the semi-final loss to France three days before.

Courtois remarked, "This merely indicates that we play too many games." "We have a World Cup in November next year, so we may have to play until the end of June again. We'll be hurt, and no one will care about the players any longer.

"We'll have to play four games in the Nations League after a long season, and we'll only have two weeks off, which isn't enough for players to be able to play at the greatest level for a year.

"It will always be the same if we never say anything. They (UEFA) may be enraged that other teams are forming a Super League, but they don't care about the players; they only worry about their wallets."

According to BBC Sport, Uefa said: "The number of matches played by national teams has not increased as a result of the Nations League. It is scheduled to take place on specific dates in the international match calendar.

"Its inception was intended to encourage national team football at all levels with relevant, balanced, and interesting matches, which has really occurred due to the fact that all sides had goals to attain in the competition."

"Uefa does not keep any of the revenue from the Nations League, which is totally redistributed to its member associations. These funds are used to organize and promote football across Europe."

Fifa, the world governing body of football, is considering more changes to the calendar, including a World Cup every two years instead of the current four.

Courtois continued, "You hear they want to put a European Championship and a World Cup every year." "When will we be able to relax?" Never.

"As a result, top players will be hurt all of the time, and that will be the end of it." It's something that should be handled much more carefully. "We're not robots," says the narrator.