Manchester United drew 1-1 with Everton in their penultimate game before the October International break. Despite playing in front of a raucous Old Trafford crowd, United were unable to respond to Everton's second-half equalizer with a second goal.

Questions about the poor defending in the build-up to the second goal remain, with much of the blame falling on Brazilian midfielder Fred, while Ole Gunnar Solskjaer's legitimacy as the appropriate manager to lead United to silverware has been questioned once again. While the draw keeps United within striking distance of its Premier League rivals, there is a significant sense of discontent surrounding the club after it has so far failed to improve on last season's terrible home form.

United are two points behind European Champions and title favourites Chelsea, who have 16 points, going into the international break, and on paper, this doesn't appear to be a horrible situation. However, given the difficult nature of the games that Solskjaer's team will face immediately following the International break, some may argue that United needed to pick up a few more points before the break.

United have yet to play a "top six" team, and their first game back from international duty is against Leicester away from home, which is never an easy place to visit. The significance of these matches is even greater than usual now, as questions about Solskjaer's managerial skills continue to build.

With that in mind, here are the tough fixtures coming up for Manchester United: 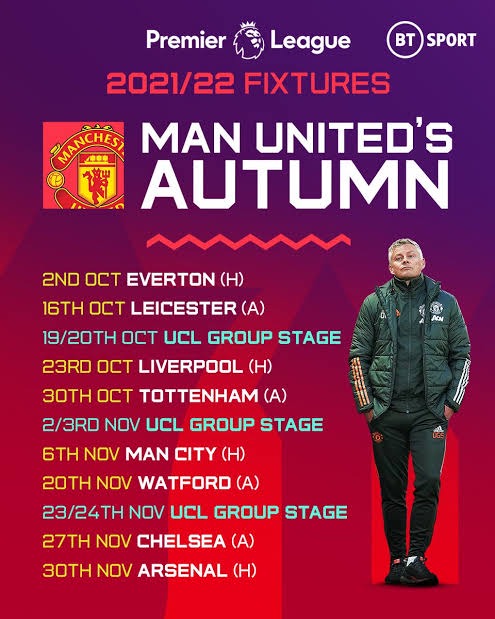 Do you think Manchester United can win those tough matches