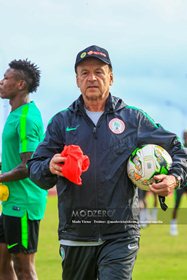 Rohr coached Zidane for half a year during the 1995-1996 season at Bordeaux and the attacking midfielder was a key member of the squad that reached the final of the UEFA Cup that season.

"This modesty is what makes him special ," Rohr said to SPORT BUZZER.

"He doesn't appear like Pep Guardiola or Jürgen Klopp. Zidane is calm, reserved and pleasant. "

Zidane recently won his 11th trophy as Real Madrid boss, and Rohr has stated that the three-time FIFA World Player of the Year showed signs of being a future manager during their time at Bordeaux.

"During the months at Bordeaux, he kept asking questions during training when I gave instructions. He was very interested and I already thought back then that he could become a good coach," Rohr said.

The German coach added that Zidane was confident of Bordeaux overturning a 2-0 deficit against AC Milan in the quarterfinals of the UEFA Cup in 1996.

"He wasn't the captain, but he went ahead. He convinced with performance, not with words."