Seth Rollins kicked off the RAW after Extreme Rules and spoke about the injury he inflicted on Rey Mysterio last night. Rollins said the image of the gruesome injury will stick with him forever and then added that the WWE Universe was responsible for making a monster out of him.

Aleister Black came out to avenge Mysterio and took out Murphy at ringside by hitting a few kicks and sending him over the announce desk. Rollins took the opportunity to flee the ring before we headed for commercials on RAW.

We returned to RAW to see that a match was underway and Rollins was taking a beating early on. Rollins turned things around and hit a slingblade before focusing on Black's right arm. Rollins hit a suplex for a near fall before sending Black into the turnbuckles.

Back on RAW, we saw Black kick Rollins a couple more times but Rollins hit two superkicks of his own as both men went down. Rollins called to Murphy before using the ropes to hurt Black's arm. Rollins managed to hit the stomp and get the win in the end.

After the match, Murphy and Rollins attacked Black, sending him into the barricades before Rollins used the ringpost and then the announcers' table to injure Black's arm even more. Rollins stomped on his arm before a group of officials came out to stop the carnage.

Backstage on RAW, Ron Simmons was seen giving advice to MVP and Bobby Lashley. They approached R-Truth who was carrying a frying pan to defend himself. Shelton Benjamin came out of nowhere and wiped out Truth to become the new 24/7 Champion.

We returned to RAW to see Lashley beating up Cedric in the ring before tagging in Benjamin who continued the onslaught. MVP was in next as they trapped Alexander in their corner, keeping him for making the tag. Lashley came back in and hit a spear before MVP hit a big boot in the corner.

MVP hit the ballin' elbow before getting a near fall on Cedric before hitting a big boot. Ricochet was finally tagged in and thanks to some big moves, the babyfaces were now on a roll as we headed for another break on RAW.

We returned to RAW to see Ricochet in trouble as he made the tag to Ali who hit a huge dropkick on MVP before sending Lashley over the announcers table with a huge dive. Ricochet wiped out Benjamin at ringside from up high. In the ring, MVP was hit with the neckbreaker followed by the 450 by Ali for his first win after his RAW return.

Randy Orton was backstage on RAW and said that he had lost a lot of friendships in the business before vowing to end Big Show's career tonight.

After the break, Ron Simmons was seen hanging out with the Viking Raiders backstage on RAW.

Samoa Joe was in an interview on RAW with Christian about his medical condition. He said that he was still in pain and still recovering but he was confident Big Show would be able to overcome Randy's dirty traps.

Bianca Belair was backstage and Peyton Royce showed up to make fun of her. They argued for a bit before Ruby Riott came in and we learned that Billie Kay was not there tonight.

Riott was dominating off the bat but was grounded by Royce who taunted her, calling her a loser who 'doesn't have any friends'.

Royce caught Riott with the ropes before hitting a big kick but missed the top rope move. Ruby hit the Riott kick and picked up the win on RAW.

Andrade and Garza were talking about being the next RAW tag champs in an interview backstage on RAW when the Street Profits ambushed them, taking them out before the match.

Andrade and Garza attacked both champs right as the bell rang and Dawkins was in the ring with Garza first. Ford was tagged in and took Garza out before diving onto Andrade on the outside as we headed for commercials on RAW.

We returned to RAW to see the heels corner Ford and Garza hit a huge kick to the face before making a tag. Ford managed to get a tag and Dawkins took Andrade down for a pin but Garza broke it up. Ford was tagged in and hit an incredible Frog Splash before getting the pin.

Backstage on RAW, Andrade & Garza were furious about their loss.

Bayley and Sasha Banks were out next and Banks was adamant about calling herself the new RAW Women's champ. She called herself 'two belts Banks' before Asuka came out.

Asuka called Banks a thief and they were about to fight before Stephanie McMahon came on the Titantron to tell them that Banks didn't win last night. She announced that a rematch will be held next week for the title and if Bayley interferes, Sasha will lose the match.

We returned to RAW to see that the match was already underway and Sane was dominating with an early near fall. Bayley turned it around but was taken out with a crossbody. Bayley hit a suplex and got a near fall before Sane rolled her up off a counter.

Bayley tried to hit a suplex from the apron but Sane hung her up on the ropes to hit a top rope stomp before we headed for ads. Back on RAW, we saw Shayna Baszler watching the match and said that she was more deserving of facing Bayley.

In the ring, Kairi was still in control and hit a double stomp from up hight for a near fall. She hit the Insane Elbow but Bayley got her foot on the ropes to break the pin. Bayley hit the elbow drop herself but Sane kicked out. Sane countered the Bayley to Belly and rolled her up for the pin.

Drew Mcintyre was bacsktage on RAW and was headed to the ring next.

Drew McIntyre was out on RAW and was interrupted by Dolph Ziggler who said that Drew was afraid of him last night. Ziggler went on a rant yet again and Drew told him to 'bugger off'.

Dolph kept speaking before taking a headbutt and Drew left. Ziggler called him back and pretty much begged for another title match under any condition. Drew accepted, saying that he would pick the stipulation but that stipulation will be announced right before the match.

Big Show was backstage on RAW and said that he realized the risks of facing Orton before talking about when they were friends. He said that he was ready to face Randy regardless of what lay in store.

The unsanctioned match on RAW began with Show going for it right away and took Randy to the corner for some big moves. Randy was taking some big shots early on as Show hit a spear before reaching under the ring for a table. Andrade and Garza came out of nowhere and attacked Big Show outside. 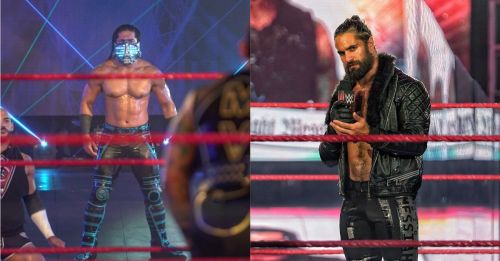 Andrade & Garza were setting Show up for the punt at ringside before The Viking Raiders took them on. Back on RAW, Randy Orton was finally getting some offense in but Show hit a chokeslam to ground him with a near fall.

Big Show was setting up a table in the ring and managed to set Orton up on it before going up top. Big Show went through the table but Randy managed to step away at the last second.

Orton hit the RKO for a near fall as the main event of RAW continued. Randy got a steel chair to hit Show with and smashed him a good few times with it. The Viper hit the Hanging DDT and then set up for the finisher. Orton hit the RKO and got the pinfall to finish the match.

Orton went for the Punt Kick after the match and connected with it, finishing off another legend.

We got a great RAW after Extreme Rules with some very intense matches and great promos. Banks and Asuka got a rematch for the RAW Women's title while Dolph Ziggler negotiated another title shot against McIntyre next week. We got a new 24/7 champ as well and the main event was quite the shocker.