As Man United boss continues the rebuilding job at Man United in the hope of getting them back to the level they enjoyed under Sir Alex Ferguson, news that one of the club’s targets wants to play for Pep Guardiola at Man City isn’t likely to have gone down well in the corridors of power at Theatre of Dreams.

Although Kalidou Koulibaly is already 29 and will cost a reported £72.5m, the Napoli defender has highly sought after. Senegal international would rather ply his trade, if he is to leave the Partnopei, at the Etihad Stadium next campaign as he wants to play under Pep Guardiola.

It’s generally accepted that although Man City have been excellent going forward, they’ve struggled at times defensively, particularly in the central areas.

Aymeric Laporte’s long-term injury didn’t help Guardiola, and the hire of Koulibaly, therefore, makes sense for a number of reasons.

Kalidou is a huge presence at the back for Napoli, and because of his physicality is difficult to shake off of the ball. His aerial presence is also a huge plus. A ball footballer too, he’s precisely the type of centre-back that fits the Guardiola mould. 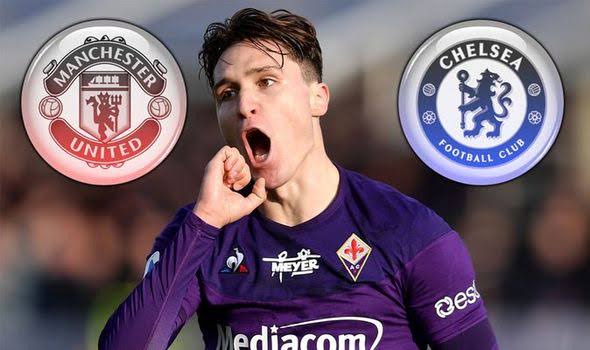 Newcastle United are reportedly interested in securing the services of Fiorentina winger Federico Chiesa during the summer transfer window.

The Magpies, who remain in talks over a big-money takeover, ready to rivlas Manchester United and could try and lure Italian winger at St James Park ahead of the next season.

According to La Nazione, Steve Bruce’s side are exploring the possibility of signing Chiesa, who has been strongly linked with a switch to Old Trafford.

The Red Devils have been strongly linked with the 22-year-old, though, with the latest form of Mason Greenwood, Ole Gunnar Solskjaer could give the youngster chance next season.

Chiesa has been in stunning form for his Italian club during the current campaign, founding back of the net seven times and providing five assists in 30 games in all competitions.

The Italy international’s deal with La Viola is set to expire in the summer of 2022.

Manchester United yet to make additions this summer with hosts of big-name players have been rumoured with a switch Old Trafford, including Barcelona forward Antoine Griezmann and Dortmund’s winger Jadon Sancho.

The Red Devils currently sit fifth in the Premier League table only one point separating from Leicester City that are fourth in the standings. Since the turn of the year, the Red Devils have been frequently rumoured with the Borussia Dortmund attacker, who has been valued at £100m.

However, while it has been reported that the Red Devils are prepared to bid in excess of £50m, it stays unclear whether club officials are prepared to meet German giants asking price following to the financial implications from the coronavirus pandemic.

According to The Athletic, France international forward has emerged as a different option for the Red Devils after failing to make a sustained impact at Barcelona.

Having started only 49 games in all competitions since 2017, the former Dortmund star could be available for half of his £96.8m price this summer.

The France international has not made an appearance for the Spanish giants since November due to injury and it seems that he will miss the rest of the season as well.

Jadon Sancho is for sure the better option at the moment, however, Dembele has been one of the most skilled players in the football and if he managed to remain fit he could become one of the best players in Europe.

Inter will try to extend Alexis Sanchez’s loan until the end of August and are continuing to evaluate signing him on a permanent basis according to a report from Italian broadcaster Sky Sport Italia, which was aired a short time ago.

Sanchez is currently on loan at Inter until August 6 and Inter will try and strike an agreement with Manchester United to keep him until the end of August, which would allow him to play in the Europa League.

In a bid to try and convince the Premier League side to agree to a loan extension, Inter are willing to insert a clause which would mean they would have to pay a fee to Manchester United should the two sides cross paths in the Europa League.

The report goes on to state that Inter’s evaluations with regard to next season are ongoing and they are thinking about signing him outright but his wages represent a real stumbling block.