Nadal advances to the quarter-finals of the French Open with a victory over Sinner.

Rafael Nadal advanced to the quarter-finals of the French Open for the 15th time on Monday, defeating Italy's Jannik Sinner in straight sets to keep his hopes alive for a 14th Roland Garros championship and a record-tying 21st Grand Slam.

Third seed Nadal overcame 19-year-old Sinner 7-5, 6-3, 6-0 and will now face Diego Schwartzman of Argentina, whom he defeated in the semi-finals last year.

Since his 2005 debut, Nadal has won 104 matches at Roland Garros, with only two loss, and Monday's victory extended his winning streak in Paris to 35 sets.

The 35-year-old Spaniard is seeded third in the world and will face Novak Djokovic in the semi-finals.

Djokovic overcame Sinner's compatriot Lorenzo Musetti, who had to retire in the fifth set after shocking Djokovic by claiming the first two sets.

“I got off to a good start, then I became a little too defensive. I provided him the opportunity to play his greatest shots inside the court. “That was a blunder,” Nadal said.

“In the first set, I broke back at 5-4, and the match transformed after that. I had a lot of fun playing.” 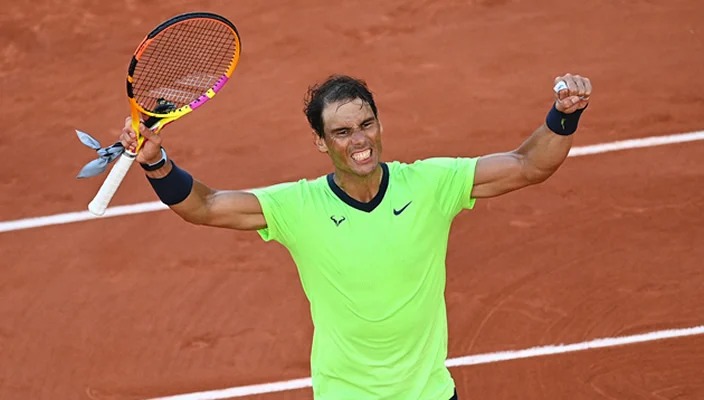 Nadal had previously defeated Sinner in the quarterfinals of the 2020 French Open and the Italian Open this year.

In the third set, he scored 31 winners, with the Italian collecting only 10 points.

Stay safe and sanitize your hand .