4 Things to expect as Chelsea take on Manchester United

By _barrydrex (self media writer) | 2 years ago 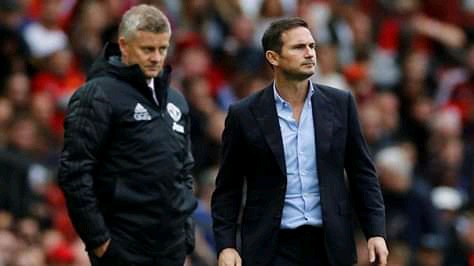 Both Lampard and Solskjaer are in a similar situation: two young managers who were legends as players for their respective clubs, who need silverware despite time being on their side.

Still, we need to understand that there’s a huge rivalry between these teams, and even a friendly between them would be played fiercely.Considering the h2h domination of Red Devils recently, and their absolute return to form, picks them out as the slight favorites. On top of that, the Blues have been going through some struggles lately.

However, Frank Lampard’s men still pose some serious offensive threat, and with some key personnel missing in the back, Ole Gunnar Solskjaer’s men could be expected to concede. And to pile on, the Blues had lost two of their former five fixtures, and they had conceded two or more goals in three of the last five overall games.

As such, expect Manchester United to avoid a loss at the minimum.

However, this is a knockout game, and that too the semis. Any team has a puncher’s chance in here – especially Lampard’s men, who had won nine of the past eleven overall fixtures, and who had scored two or more goals in eight of their last twelve games

1)Luke Shaw and Brandon Williams were both missing from United's squad which beat Crystal Palace 2-0 due to injury The latter is not thought to be a concussion concern, meaning that he should be available to return for this match after Solskjaer handed a rare start to Timothy fosu mensah against Crystal Palace 2)It is more likely that Kante may not return and if he does he is more likely to feature as a substitute given Chelsea's crucial Premier League run-in, especially with Billy Gilmour out for the season following surgery on a knee injury. 3)Odion ighalo is one of those who will be pushing for a start, having scored every time he has been named in the starting XI for the club. 4)Olivier Giroud may be given the nod up front again after his winning goal against Norwich, though Tammy Abraham may fancy his chances given his pace up against Harry Maguire