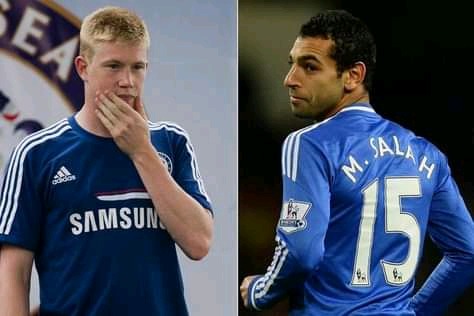 Mohamed Salah is one of the best players in the world at the moment. He has scored over 100 goals in all competitions for Liverpool. Salah who joined Chelsea from Basel left the club to prove himself at Fiorentina on loan and later joined As Roma on a permanent transfer. From As Roma Salah moved to Liverpool where he became a world-class player.

De Bruyne has been the best Midfielder in the English Premier League for the past few seasons. He is also one of the best midfielders in the world at the moment. De Bruyne who joined Chelsea in 2011 left the club to become a world-class player and one of the most complete midfielders in the history of football. He has won many trophies with Manchester City since he left Chelsea.

Juan Cuadrado was so good at Fiorentina before he moved to Chelsea. His stay in London was cut short because he finds the Premier League so difficult. However, Cuadrado left Chelsea to prove himself somewhere else. He became a world-class player at Juventus and one of the best midfielders in Europe after leaving Chelsea.

Traore came through the Chelsea academy but he was never given the chance to showcase his talent at the club. Traore went to play for Ajax and Lyon. He is one of the best players in the Premier League at the moment. Traore left Chelsea to become a world-class player. He is currently playing for Aston Villa.