By Dammydudu (self media writer) | 2 years ago 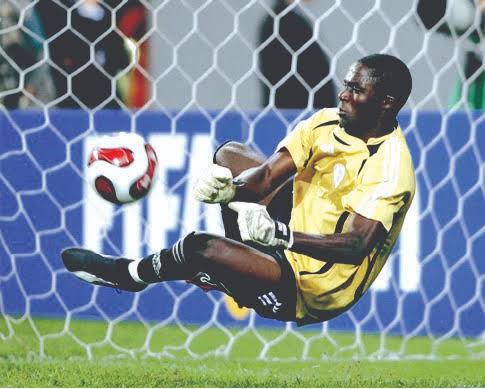 Remember the name ‘Aji-boy’?, after the commentators made that pronunciation for a certain Dele Ajiboye at the 2007 FIFA U-17 World Cup held in South Korea.

Dele Ajiboye was announced to the world after his impressive performances for the Golden Eaglets, led by Late Yemi Tella in 2007.

Nigeria won their third FIFA U-17 World Cup title after beating Spain 3-0 on penalty shootout in the finals.

Nigeria's hero was goalkeeper Dele Ajiboye, who saved two penalties in the shootout as Golden Eaglets won the tournament for the third time after successes in China in 1985 and Japan in 1993.

The former Nigeria U-17 Goalkeeper, revealed how he was picked by Late Yemi Tella for the tournament.

“It was a very surprising moment for me. Laide Okanlawon was the Golden Eaglets Goalkeeper then, but he got a red card before the U-17 World Cup in South Korea. Out of choice, the coach threw the camp open for Goalkeepers to come jostle for a place in the team.

“There were so many Goalkeepers at the U-17 camp, just before the World Cup and I was picked to be among the three Goalkeepers for the tournament. It was a very defining moment for me, because I was still with Prime FC of Oshogbo in the second division, only to be picked as a World Cup Goalkeeper”. Ajiboye said.

After his impressive performance for the Golden Eaglets at the tournament, Ajiboye, was included In the Nigerian U20 team for the 2009 African Youth Championship in Rwanda.

He was Nigeria’s starting goalkeeper for the 2012 Olympic qualifiers and All Africa Games qualifiers under Coach Augustine Eguavoen.

“After the successful tournament we had in South Korea, I was called to the U-20 team and it meant so much to me that I’m being seen as a good Goalkeeper. I did my best and got called to the U-23, three years later. The U-17 tournament opened a lot of door for me and I’m grateful to God for giving me such blessings”. He said.

Dele Ajiboye made a move out of the country to a Spanish Side, after his U-20 exploits in 2009 and highlighted it as the biggest point of his career.

“I’ve had almost all of my career in Nigeria but the biggest moment of my career was when I made a move to Spanish Segunda B side, Pontevedra CF from Wikki Tourists”. He said.

After his heroics for Super Eagles Team B team in 2017 WAFU Cup hosted by Ghana, Dele Ajiboye was invited to be part of the Super Eagles preliminary 30-man team but was eventually dropped, as he could not make the 23-man list for the Russia 2018 World Cup.

“The World Cup is the biggest stage for any player, it was on my mind and I was disappointed after being dropped by the coach. I had an astonishing season with my club and was expecting to make the team to the World Cup”. He said.

The 29-year old shot stopper finished by revealing what Plateau United’s NPFL title triumph in 2017 meant to him.

“That was my first NPFL title and it mean so much to me, it felt special winning it with Plateau United”. Ajiboye concluded.

Content created and supplied by: Dammydudu (via Opera News )