Man utd and Chelsea will qualify for UCL. See analysis.

By Nicholas*Nickman (self media writer) | 2 years ago

It is no news that the winner of the 2019/2020 English premier league title is liverpool fc. They are the current champions and not only did they win the EPL title with style, they also secured a champions league spot for themselves next season.

Mancity also have secured a spot for themselves in the champions league next season, although they didn't really dominate the way they normally do. Since the first and the 2nd spot has been taken by mancity and Liverpool, there is still two more spot left for the champions league qualification next season and there have been a silent but fierce battle between Chelsea, leicester city and Man utd since the resumption of the EPL for who is going to occupy the remaining two spot.

The question of "who is going to occupy the remaining two spot" depend on their remaining fixtures, current form and availability of players. 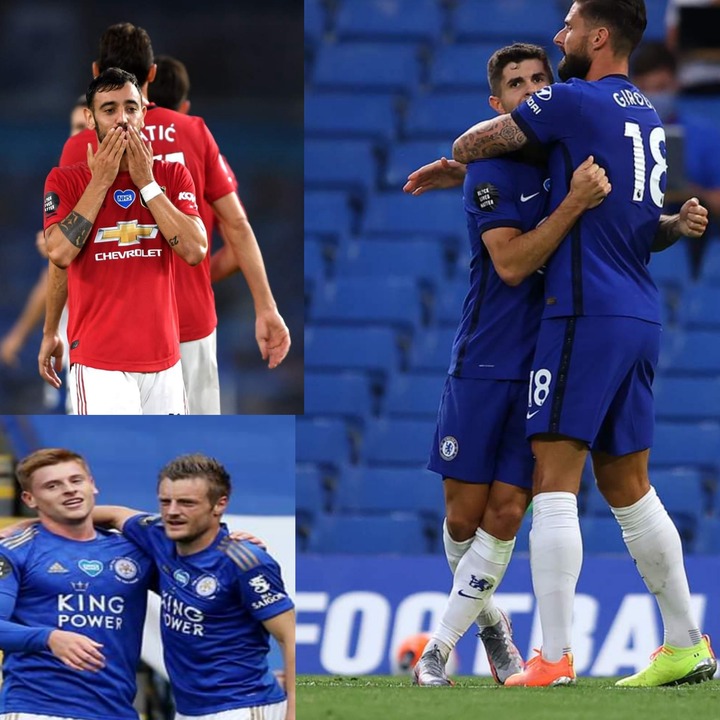 Chelsea are one point above leicester city and man utd. So they just need only four points to qualify for UCL, since man utd and leicester city will play against each other in their last EPL game of the season. Based on their current form, they have not been really good defensively but there is a very high chance they can squeeze out 4 points from their remaining fixtures considering liverpool's contentment and wolves acknowledgement that they are off the race for the champions league spot.

Man utd have been on a very solid form since the resumption of the EPL, even though the form of some of their players waver in some matches, they never fail to produce good result. Man utd need at least four points in other to earn a champions league spot provided they either draw or win leicester city and leicester city drop point against Tottenham.

There is also the possibility of man utd getting all 6 points in their next fixtures against West ham and leicester city.

Leicester city on the other hand just seem to be the certain team to lose out on the top four race because the chance of getting all 6 points against Tottenham and man utd is very slim.

Since the resumption of the EPL leicester city has won only two matches and have lost the team prowess of players like Chilwell who is out due to injury.

There was a time this season when leicester city thought they were safe in the top four and were definitely going to qualify for thr UCL next season. They watched with high heads as Chelsea, man utd and wolves fought endless for the top four spot. But now things look scary and they have been dragged into the battle.

With their current form they are likely to drop points when they meet both Tottenham and man utd. Making them the obvious losers and victim to miss out on the top four race.

Analysis shows that Chelsea and man utd will qualify for UCL, while leicester city will loss out.

But this is football anything can happen!!!!!!

Content created and supplied by: Nicholas*Nickman (via Opera News )