By Sportcenter (self media writer) | 2 years ago

Juventus were up against Lazio hoping to get a win and increase their point tally as they relied on their tallisman the ever present Cristiano Ronaldo who gave them a 2-0 lead. 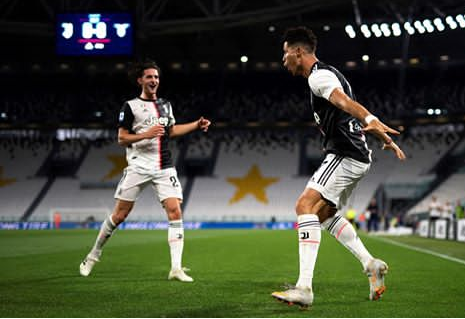 First goal was a penalty decision because of a handball which Ronaldo took and scored and the second was from a counter started by Dybala which saw him one on one with the Lazio goal keeper and passed it to Ronaldo for an easy finish to bring his serie a goals to 30 for the season.Ronaldo could have easily gotten a hat trick as a cross from Dybala met his head and hit the cross bar.

Juventus were in full control of the match until Lazio were awarded a penalty because Bonucci made a late challenge on Immobile which he scored and made him level on goals with Ronaldo.

The match ended with a 2-1 victory to Juventus wimhich moves them eight points away Inter Milan who are second in the table.

After the match Maurizio Sarri labelled Cristiano Ronaldo "extraordinary" after the Juventus superstar became the fastest player to score 50 series A goals.

He also said that when Cristiano smells blood… He's extraordinary, as he recovers so quickly between games," Juve head coach Sarri told Sky Sport Italia. "It's not just physical, but psychological.

"He could be someone who uses up so much energy in each game, but he recovers it every time and he's world class in the mind as well as the legs.

Content created and supplied by: Sportcenter (via Opera News )