By Orlalekan (self media writer) | 2 years ago

Real Madrid won the La Liga title for the first time since 2017 after a 2-1 win over Villarreal gave them an insurmountable seven-point lead over Barcelona with one game left to play. The triumph extends Los Blancos' record haul to 34 league titles -- eight more than Barca, who had lifted the past two La Liga trophies. 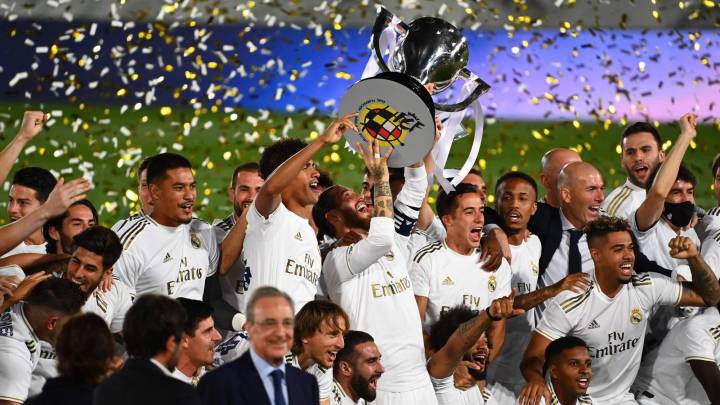 Karim Benzema scored both goals, firing Real in front before the break before adding a second-half penalty, to wrestle La Liga back from Barcelona after two years. Vicente Iborra pulled one back but it mattered little to Real as the club wrapped up their 34th Spanish title. Zidane's side have won all 10 of their matches since Spanish football restarted in June. They head into the final day of the season with an unassailable seven-point lead over second-placed Barcelona whose form and finances have been ruined by the coronavirus. "This is better than anything. It takes a tremendous effort to win La Liga," said the Real Madrid boss. "After 38 matches, you have more points than anyone else. After lockdown and everything, it's astonishing." Zidane refused to let his mind drift to the possible celebrations and didn’t want to entertain the importance of the game in the grander scheme of things before kick-off on Thursday night. “I don't have to think about if we draw tomorrow, or on Sunday. Tomorrow, we will be going all out to win the game, as we do in every game,” he said in the press conference before the Villarreal game. There had to be part of him that sensed something inevitable about a title win given their recent run but he wasn’t about to show that in public.

The legendary ex-player is a serial winner and this is his 11th title as the Real Madrid boss in just over four years. The reason he left in 2018 was in part due to Madrid’s failure to win the league that year and the manner in which they lost in the Copa del Rey that year, bowing out to Leganés. Losing for Zidane is never acceptable even when it is accompanied by winning a Champions League trophy the same year. Zidane has always maintained that the league is the hardest of all trophies to win: “It’s more difficult to win the league than it is to win the Champions League,” he said in 2018 after losing the league to Barcelona. “I have always said it and I won’t change. I have said it all my life.” Madrid have had to compete for much of the campaign without €100 million star signing Eden Hazard, who has struggled with a persistent ankle injury that eventually required surgery.

The 2-0 Clasico win over Barca on March 1 was significant -- but it was followed by a 2-1 defeat at Real Betis that left Barca two points ahead when La Liga was suspended on March 12. Since the restart on June 11, Madrid have maintained a 100% record.

Madrid veterans Sergio Ramos, 34, and top scorer Karim Benzema, 32, have made important contributions in attack, while Thibaut Courtois will win the Zamora trophy for the La Liga goalkeeper with the best goals-to-games ratio.

There will be no title celebrations, including the traditional bus parade to the Cibeles fountain, with club and local officials asking fans to stay at home over concerns about further outbreaks of the coronavirus.

The squad can now set their sights on replicating their La Liga and Champions League double from 2017 – and there are no foregone conclusions for them either. The newly crowned Spanish kings travel to the recently dethroned English champions Manchester City at the start of August but will have to overturn a 2-1 deficit in the last-16 tie.

Content created and supplied by: Orlalekan (via Opera News )