By Wecare (self media writer) | 2 years ago

Nigeria is blessed with talented and prowess player, which one of them is Taribo West whose impact cannot be forgotten in the history of Nigeria football. he was a tough-tackling defender and he was known for his brightly-coloured hairstyle. Taribo West was born on March 26, 1976 in Port-Harcourt, River State and his mother was a petty trader.

Life was not rosy for Taribo West, so in the middle of the struggle to live a good life, he travelled to Lagos where he did some hard job in Shomolu District in Lagos, a perilous, gang- ridden slum and West was part of several crime, as he was a cult member and in spite of being a tough guy, he had passion for football, as he also gained popularity by playing street football. 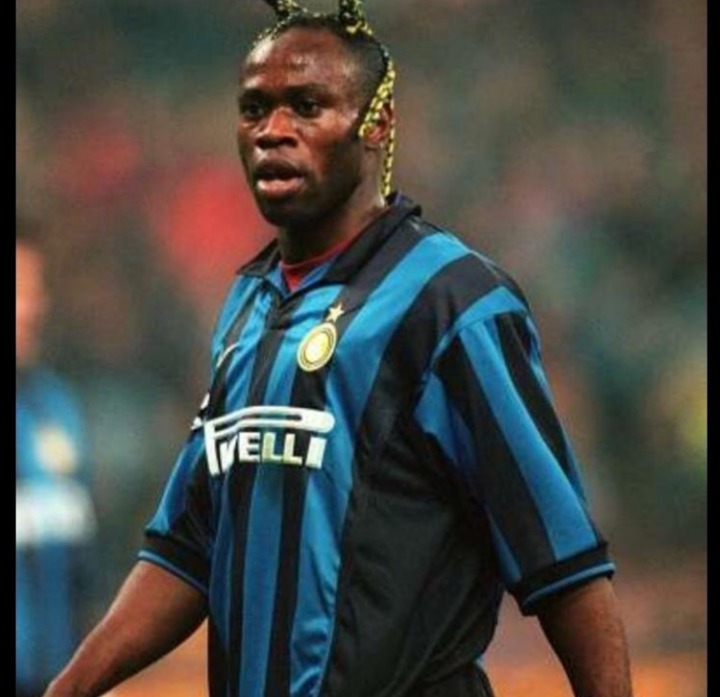 One day Taribo West and his best friend returned with a bag full of stolen money to the street and they were approached by other cult faction, they requested for the money but West's friend refused to give them the money. in the course of this it resulted into a tussle and West's friend got stabbed. West could not help his friend and luckily for Taribo West he escaped with the money. After he has seen the bad side of gangsterism, which his best friend has lost his life, Lagos was not safe for him anymore so he left Lagos for Port-Harcourt and he decided to focus on Football.

The impressive performance of West caught the attention of Monday Sinclair who recruited him to play for Sharks. West began his football career professionally with Obatan in 1989 before he returned to Sharks in 1990. In 1993, West was signed to French side, Auxerre where he appeared in seven matches in 1997, he was transferred to Italian side, Internazinate on a four years deal. while at the club, he appeared in 44 games with one goal.

In 2000, he was transferred to Millan club with 4 appearances and 1 goal. towards the end of that year around November, he was loaned to Derby County in England on three months loan. In 2001, West had another transfer to FC Kaiserslautern club. in 2003, West moved to FR Yugoslavia champion Partisan, where he appeared in 16 matches and he scored 1 goal.

In 2004, he was signed on a one-year contract with Qatari club, Al-Arabi and in the same year, he moved to Plymouth Argyle club on a one-year deal.

In 2007, he was signed to Iranian side, Paykan Club on a three-month deal where he ended his club career. Regarding his international career, west was part of Flying eagle squad at 1993 Africa youth’s championship, he was also part of the squad that won 1996 summer Olympic. After two years, he was called up to Nigerian senior team, Super eagle formerly known as Nigerian eagle and he was part of the squad of 1998 who played in the Fifa world cup competition alongside Okocha, Kanu, Oliseh and many others. He has played several games for Nigerian and his final appearance for super eagle was in 2005 in a friendly match against Libya. Around 2017, there was a speculation that the former Nigerian footballer passed out but contrary to the speculation, Taribo West came out to disclose in an interview with famous Newspaper house, the Nation that he is hale and hearty.

How He Gave His Life to Christ

Taribo West has a sister, named Patient who is a devoted Christian. she visited her brother in his home in Millan and she told West that she could feel some spiritual activities in his house but West paid no attention to her words and he went on to train. His sister was still in his house praying to God to change his brother. while her brother was still training, she had slept and had a dream about her brother. when her brother came back from training, she revealed the dream to him that God was calling him from his bad evil way then he joined hands with his sister and they both began to pray. "As we were praying all the drawers in the house began to open and shut spiritually I thought it might be just the wind but as that thought entered my head, all the doors began to bang as if it was like something from a bad film, but all I knew was reality. I experienced warm feeling inside and my sister turned to me and said Taribo God said you will be a pastor” these were his words after conversion. Confession On How He Used Charm To Play

Taribo West who is now a pastor once opened up on his hidden things he did during his playing days. how he used to hold magic and burn candle given by traditional doctor before matches. he added that most players and coaches also indulge in such act and when asked if he was truly involved in this act, he said yes. he even went further by saying when he was a Footballer, he used to get some witch doctor who make charm for him, which he would put in socks or shoe before matches. Whatever you do today will be history tomorrow. Taribo West is one of nigerian's best defenders whose impact cannot be forgotten.

Content created and supplied by: Wecare (via Opera News )