The history of Chelsea and Manchester United rivalry

By Littlebee (self media writer) | 1 year ago

Manchester United host Chelsea in the pick of the weekends premier league action as the two heavyweight of the division go toe-to-toe in what is,as usual, a mouthwatering encounter at old Trafford.

When the two sides meet, more often than not there is plenty at stake.Be it early-season one-upmanship, march-stealing points in the new year or trophies come the end of the season neither sides can afford to approach this fixtures with anything but utter focus and 100 percent intensities.

It is safe to say that United-chelsea is one of the most hotly anticipated matches of the season, and when these two sides meet, they rearly disappoint.fireworks of some description usually ensue.

But it hasn't always been so.The rivalry between the two club is not a traditional one and has only really reached it's current levels in the modern era.

Rivalries in football are usually born out of two things: geographical proximity or persistent competition for honours between two clubs.And with the 170-odd miles and a plethora of other football establishments–separating the two, it is definitely a case of the latter.

Both club had enjoyed success prior to recent times—Chelsea in the'50s and the mid to late'60s , United in the Busby era—but these periods could not be sustained long enough for them to overlap and a proper rivalry was never formed.

After a barren spell lasting 26 years, Alex Ferguson guided United to the first premier league title in 1993 and so began the creation of one of the all-time great football dynasties. 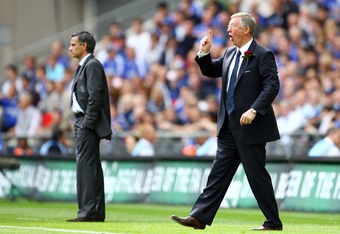 United became embroiled in an entertaining albeit relatively brief, rivalry with Newcastle United before arsenal stepped up to the plate to become the major threat to Ferguson's side in the late 90s and early noughties.

Some of the battles those two club fought will endure in the memory for a long time, but the arrival of Roman Abramovich and his seemingly bottomless pocket at Chelsea in 2003 signalled the emergence of a new contender soon after the Russian had taken over at Stamford bridge, Jose Mourinho landed the blues their first title since 1955 and a fierce rivalry was born.

Indeed, along with Abramovich's limitless cash , Mourinho can take a great deal of the credit for the rivalry between the two clubs today.Not only did the Portuguese use his boss's money to good effect—winning two league titles,an FA Cup and two league cups in whirlwind three years in London— he also knew how to wind up the opposition.

With the two club competing for honours on the pitch,off it he and Ferguson regularly enjoyed verbal jousts, culminating in the latter once claiming the former "has no respect for anyone but himself".

The pair's antics undoubtedly had an effect on their players too, ramping up the intensity between them once they stepped into battle.

When Mourinho left for Real Madrid,Ferguson did admit to being upset the premier league had lost"the young gunslinger who has come to town to challenge the old sheriff", but the rivalry lived on, despite the absence of one of the main protagonists.

Later that season, the two sides went head to head in the race for the premier league and the champions league, United pipping Chelsea to both, and tensions rose at every meeting. It all boiled over in April when Chelsea forced the title race to the wire with 2-1 home win, after which United players clashed with groundstaff.There's nothing quite like some fisticuffs to take a rivalry to another level.

At boardroom level, things have been escalated by Peter Kenyon's defection from United to Chelsea, claiming at the time that his new employers would be the"biggest club in the world by 2016". That remains to be seen, but it was something that will not be forgotten by Ferguson,who has scoffed at Chelsea's'lack of history' before.

It all makes for a great rivalry, even if it's not deep-rooted one.

Many United fans will say Liverpool, Manchester city, even Leeds United, come ahead of any London club in their pecking order of rival clubs.And the Chelsea faithful are probably more occupied by their bitter rivalry with Tottenham.

But pair's recent history at least is compelling, and with both looking likely to compete for trophies once again this season, Sunday's latest instalment is as unmissable as ever.

Content created and supplied by: Littlebee (via Opera News )

Opinion: How Chelsea's Team Spirit Is What Has Been Working For Them This Season

Frank Lampard Names The Best Players He Has Ever Played Against