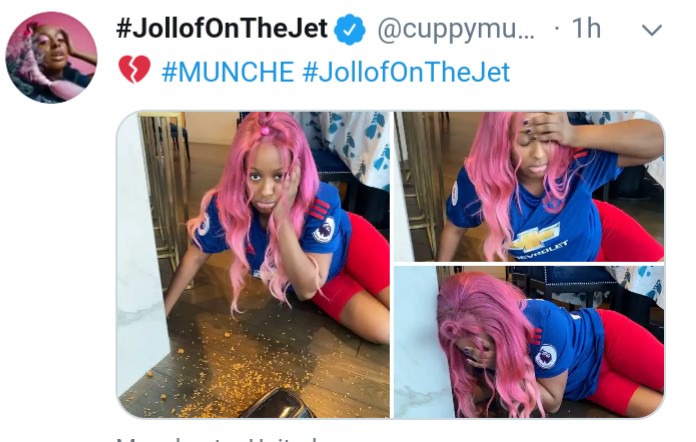 Popular Nigeria and female Dj Cuppy, whose jollof on the jet has been trending, took to her official twitter handle a demonstration of of her jollof crash after Manchester united fail to win in their fa cup semi final clash against Chelsea at Wembley.

Chelsea enjoyed a good atmosphere at Wembley as the see off their their fellow rival united to book for their place in the final were they will take on in form Arsenal side.

Chelsea broke the deadlock in the 45 minute as Oliver Giroud nods in azpilicueta well taken cross to give Chelsea the lead.

It was all the way Chelsea at Wembley as they scored a massive three goals against the united side who managed just one from Fernandez spot kick.

Chelsea how ever got their second goal shortly after the break as Williams way ward passes into the midfield is intercepted by Mount who made a run towards the Manchester united goal and slowly hit it pass David Degea whose form this season have been question several times. And it looks unlikely that the Spaniard is going to continue in goal for United come next season.

Manchester united had a big chance but Harry Maguire could not get his header on target.

Manchester united did put themselves in a more deadly situation as they conceded an own goal by under pressure Harry Maguire who poke in a low cross by Alonso. D j cuppy felt really sad for Manchester united lose as she took to her twitter handle a caption of what looks like a broken heart.