MUN 1-1 EVE: Solskjaer learnt from the mistake he made against West Ham in the EFL Cup

By SportsBible (self media writer) | 14 days ago

Manchester United drew 1-1 at Old Trafford to go level on points with Liverpool who are currently top of the Premier League table. However, they might not have done so if Ole Gunnar Solskjaer did not correct a mistake that cost the Red Devils a place in the EFL Cup 4th round. 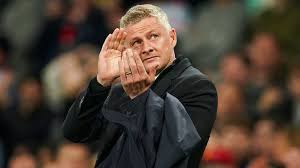 Manchester United was eliminated from the EFL Cup nearly two weeks ago after West Ham beat them 1-0 at Old Trafford. Solskjaer was heavily criticized after that match for playing Anthony Martial in the center forward position where he was ineffective throughout.

In the match against Everton in which the Norwegian once again decided to start the French International, he started him in the left-wing position instead of the center forward position and it paid off as he was lively till he was substituted around the hour mark.

Unlike the match against West Ham in which he hardly got the opportunity to shoot, his first chance came in the 5th minute when he misjudged a cross from Aaron Wan-Bissaka and headed wide. He remained involved in the game and eventually got his goal before halftime. Bruno Fernandes assisted the goal.

By choosing to start Martial on the right-wing Solskjaer also corrected another mistake he made against West Ham as he was also criticized for starting Jadon Sancho despite his poor performances since joining the club.

Unfortunately, Manchester United could not score a second goal despite dominating most of the match. It proved to be costly as Everton equalized halfway through the second half through Andros Townsend.

If there is anyone that should be blamed it is Fred who had 2 chances to stop the counter-attack that led to Everton's goal. The Brazilian midfielder was also poor in the first half as he misplaced a few passes when not under pressure from the opposition.

The next match for Manchester United is against Leicester City. It will take place after the International break.