Mustafa Ali was revealed as the leader of RETRIBUTION on the latest episode of RAW. It came out of nowhere, but those angles have the most impact, and Ali aligning with the most dominant faction on Monday Night RAW managed to be the best part about the show.

Mustafa Ali took to Twitter immediately after RAW went off the air and commented about becoming the leader of RETRIBUTION. 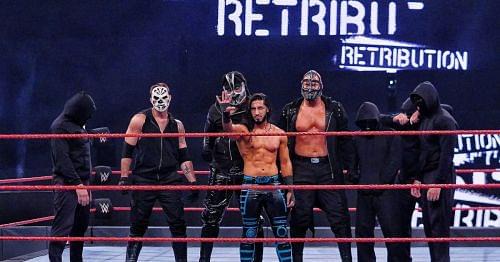 Ali wrote the following in his tweet, which was accompanied by a photo of him standing in front of other RETRIBUTION members from RAW:

Mustafa Ali's WWE career has thus far been a series of misses more than the hits. Ali was one of the standout performers in 205 Live and his performances managed to grab the attention of the WWE higher-ups. He was drafted to SmackDown in 2018 and Ali seemed destined to get a big babyface push before his untimely injury in the first half of 2019.

Ali was taken off TV, and while he was away from the ring, WWE began airing the mystery hacker vignettes on SmackDown. Several reports revealed Mustafa Ali to be the man behind the mystery hacker storyline; however, WWE dropped the angle for an unknown reason.

Ali was finally brought back to TV after a lengthy hiatus as part of the babyface team of Cedric Alexander and Ricochet in a six-man tag team match against The Hurt Business.

However, the company began booking Ali in matches on WWE Main Event, which ended up frustrating his fans even more.

It might have all been a big part of the plan to maintain the element of surprise of the eventual revelation of Mustafa Ali being the leader of RETRIBUTION. And we must say, the apparent diversion tactic worked wonders.

Ali challenged MVP on this week's RAW in a singles match but the bout never officially got underway as RETRIBUTION surrounded the ring. Ali briefly got on the same page as The Hurt Business to fend off the opposing stable.

However, the 34-year-old Superstar got out of the ring, had a face-off with T-Bar, before turning his back and ordering RETRIBUTION to attack The Hurt Business.

The well-executed turn has reinvigorated both Mustafa Ali's career as well as the RETRIBUTION storyline, and we just can't wait to see how WWE follows it up in the weeks to come.

What are your thoughts on Mustafa Ali as the leader of RETRIBUTION? Note them down in the comments section.