As confirmed by WWE on the last episode of SmackDown, WWE Superstars Jeff Hardy and Sheamus will lock horns in a 'Bar Fight'. Both Superstars are expected to deliver their best in this rematch from Backlash.

As reported by WrestlingNews.co, there were speculations about the weekly appearance of the Superstars involved. In fact, the fans were led into believing that the match between Jeff Hardy and Sheamus will be on Extreme Rules. 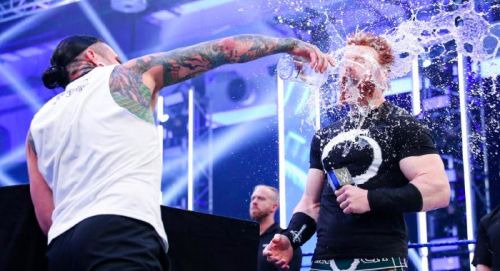 However, now it can be said that WWE are being very careful with the tapings of their matches. Its been rumoured that the match between Jeff Hardy and Sheamus was pushed from the Extreme Rules match card and added to next week's SmackDown. The reported reason why it was moved was to boost the SmackDown ratings.

The reports suggest that this is also the reason why the Unsanctioned match between WWE Superstars Randy Orton and Big Show was not reserved for Extreme Rules. So, it helped the promotion in keeping up the viewership of the show, even though we have seen a huge decline in the weekly numbers.

What happened in the WWE feud between Jeff Hardy and Sheamus?

WWE Superstar Jeff Hardy made his return to SmackDown, and everyone on the Blue brand immediately started paying attention to him. Coached would regularly cite him and the commentators would regularly praise his legendary run with WWE. However, all that attention being directed towards Jeff Hardy didn't sit well with Sheamus.

Over the course of the next few weeks, we saw both Jeff hardy and Sheamus involved a brutally personal feud. Sheamus repeatedly brought up Jeff's personal life and continued o exploit it in order to keep the rivalry interesting.

From fake DUI case to an even more shocking angle involving alcohol and Jeff Hardy, this feud has seen it all. Over the last few weeks, Sheamus was seen making fun of Jeff Hardy's real-life battle against alcohol, and the two are now set to lock horns in a 'Bar Fight'. There have been no confirmations from WWE as of this writing. But I hope that Jeff Hardy will win the important match against Sheamus and put this rivalry to bed.