On Sunday afternoon, the Blues won their first road game of the season at Leigh Sports Village, thanks to goals from Sam Kerr, Fran Kirby, Pernille Harder, Drew Spence, and Jessie Fleming. 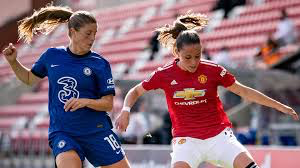 Kirby gave Chelsea a 1-0 lead after Kerr took advantage of a defensive blunder by United and squared the ball to Kirby, who tapped in from close range.

With a magnificent solo goal on 24 minutes, Harder doubled our lead, and the Blues added a third through Kerr a minute before halftime.

Manchester United equalized three minutes into the second half when Millie Bright diverted a shot into her own net, but the Blues quickly responded with Kerr's second goal of the afternoon to make it 4-1.

Before Jessie Fleming scored her first goal for the club in stoppage time, substitute Spence added a fifth goal with a clinical finish into the bottom corner.

Chelsea will now prepare for a trip to Birmingham City on Wednesday in the FA Cup semi-finals, which they reached last season.

Niamh Charles and Melanie Leupolz were brought into the Blues starting XI to face Manchester United, as Emma Hayes made two changes to the team that started our 4-0 success over Everton.

Kerr scored twice in our win over Everton, and he played in the middle of an offensive three alongside Harder and Kirby.

Erin Cuthbert was not selected in the matchday squad after picking up a knock while on international duty, but Haye was.