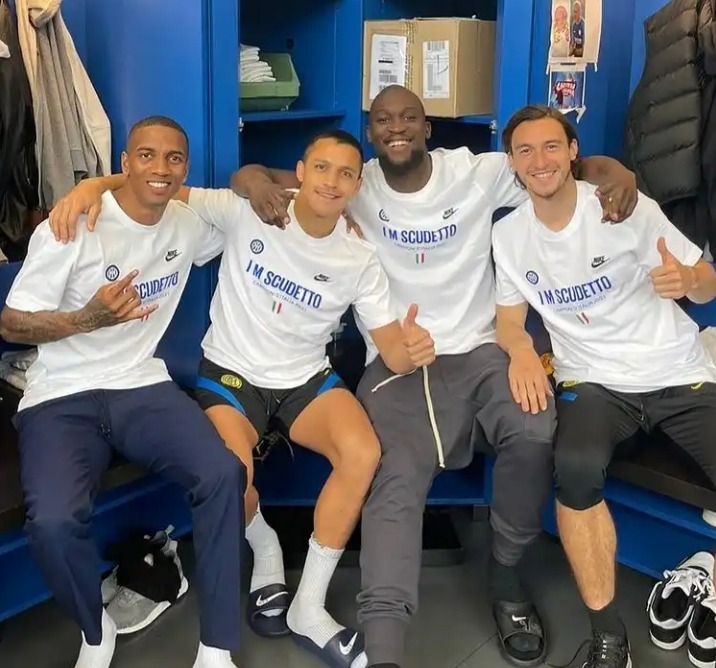 The four players share a common bond and are often seen together sharing jokes at the club, and the title win celebration provided another auspicious occasion to relive Old Trafford memories and relish the feat most of them couldn't achieve with the Red Devils.

Defender, Ashley Young, 35, who joined Inter Milan on a free on 17 January 2020 after nine eventful years at Old Trafford, posted the tell-tale picture above on his Instagram page.

The former England defender has started 14 of 23 matches for the new Italian champions, rendering four assists.

Lukaku, who has confessed to having his best season yet, was chief protagonist of the, cause, having weighed in with 21 goals in 30 starts of 33 matches. The 27 years old is playing his second season at the club following his € 65 million transfer from Manchester United on 7 August 2019. He scored 23 times for the Antonio Conte's team in his first season and could match or surpass that feat this term, with four round of games to end the season.

Matteo Darmian, 31, joined Inter in June 2020 after his loan move from Parma was made permanent. The Italy defender had joined Parma from Manchester United for €1.5 million on 1 September 2019 after failing to assert himself at Old Trafford. He has so far lived on the fringes at Inter, having started 12 of 24 matches for the Nerrazurri.

Sanchez, 32, joined Inter on 5 August 2020 after proving his mettle during a season-long loan from Manchester United in the 2019-2020 season. The Chile striker has so far mustered five goals in 27 matches, making the starting line-up on 10 occasions.