The Red Devils have failed to win four of their last six matches, some fans have called on Zidane to take charge. 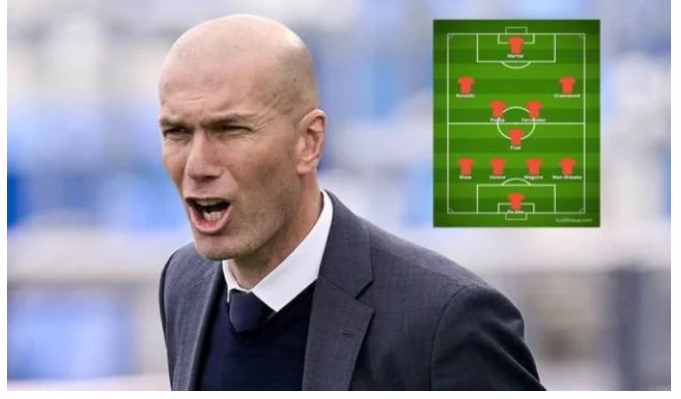 The France international is currently available after leaving Los Blancos back in the summer, where he’s since been replaced by Ancelotti.

The Norwegian coach has presided over a difficult start to the new season, but both the Glazers and Woodward believe he is the right fit at the right time. With Zidane available, however, some supporters have urged the Coach to take charge.

So we will now take a look at how United may line up if Zizou was to take over at Old Trafford, should the situation under Solskjaer continue to worsen.

These days, United's backline chooses itself. Regardless of who rules the roost.

With Dalot struggling so far this season, Wan-Bissaka is expected to be their first-choice right-back for the rest of the season.

It's a similar story at left-back with Shaw and Telles, with the latter's defensive flaws on full display.

Varane and Maguire are both pricey recruits and, despite their struggles so far, have the potential to be the best defensive partnership in the league.

The French man likes to play a 4-3-3, which usually involves one sitter.

That would almost certainly be Fred if he took over, despite the fact that the Brazil international struggles with consistency on a regular basis.

And, at United, he could assign similar roles to Fernandes and Pogba.

It’s possible any potential appointment of the French man would see an improvement from Martial.

Martial grew up watching Zidane and may respond to him better than Mourinho and Solskjaer.

Meanwhile, Zizou previously managed Cristiano and may return him to the left-wing where he was so devastating during their time together in Spain.

On the right, this opens the door for Mason Greenwood.

He has outperformed Sancho this season, and as the club's bright future hope, the Red Devils can't afford to stymie his development.