By Legend2krissOzi (self meida writer) | 1 months 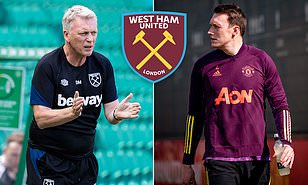 According to rumours, West Ham United manager David Moyes wants to reunite with Phil Jones at the London Stadium this summer.

While managing Manchester United from 2013 to 2014, Moyes worked with Jones before being sacked for failing to live up to the expectations placed on him as Sir Alex Ferguson's successor.

According to Eurosport, Moyes wants to work with Jones again and is urging West Ham to sign the United centre back on a free transfer.

Jones' contract expires in 2023, and United are reportedly thinking about letting him leave on a free transfer this summer to free up space in their squad and reduce their salary bill in order to build on the arrivals of Jadon Sancho and Raphael Varane.

The Hammers are waiting to see if Jones is up to the task and may offer him a lucrative deal to join the team.

Jones is expected to be offered a low basic wage with attractive add-ons based on his appearances, according to reports.

Jones' injury record serves as a concern for the Hammers, with the 29-year-old having not featured for United's first team for 18 months now due to a long-standing knee problem.

The Red Devils Set To Face The Hammers Again