Meet Record Breaking Nigerian Coach who has qualified his side to the Uefa Champions League.

By Emediongsilver (self media writer) | 2 years ago

becoming the first Nigerian coach to win a

European topflight trophy after winning the

The 46-year-old is now the first Nigerian coach to win a title with a European league side and is also believed to be the first African to do same.

for the Super Eagles between 1999 and 2002 during which time he manned the goal for Tirana, winning three trophies with the club. Following his retirement from playing in 2011, Egbo went into coaching, becoming the

goalkeeping coach of another Albanian side, Bylis, before returning to Tirana in 2014 in the same capacity.

Following his retirement in 2011, Egbo went into

coaching and become the goalkeeper coach of

another Albanian club Bylls before returning to Tirana in 2014 in the same capacity. In 2019, Egbo was promoted to become Tirana’s head coach and is now on course to lead them to a league title.

Apart from being the most successful Albanian team

in domestic competitions, Tirana have also put in the

best performance in Europe, reaching the round of 16

entrepreneur, Nneka Ede became one of the few

Africans to own a European club when she

which is in the Portuguese third division, began in June, 2020.

The development also makes her the first 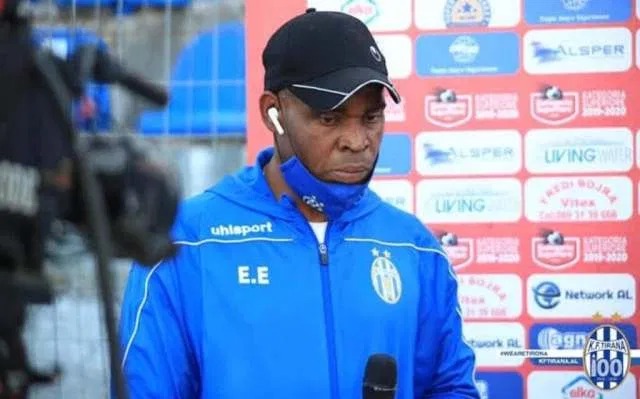 to own a European side.