UEFA Champions League Team Of The Week For Matchday 2

By Alience (self media writer) | 20 days ago

Elsewhere, Real Madrid lost at the Santiago Bernabeu to debutants, FC Sheriff. Barcelona also lost at Benfica. Liverpool recorded a 5-1 at Porto, Ronaldo scored a late goal to give United 2-1 win over Villarreal but Chelsea lost to Juventus.

Here's is my selection for the team of the week in a 3-5-2 formation.

Gianluigi Donnarumma impressed against Manchester City with many saves but Giorgos AthanasIadis was solid behind the sticks as FC Sheriff secure a historical 2-1 win over Real Madrid.

Škriniar was in good form as Inter Milan as they play out a goalless draw at Shakhtar Donetsk. He made a fantastic block to deny Pedrinho from putting Shakhtar ahead in 49th minute.

The Ukrainian international impressed against Molde supplying 2 assists in the game as Zenit St Petersburg secured a 4-0 win.

The Brazilian impressed as Zenit St Petersburg recorded a 4-0 win over Malmo. He created 7 chances and registered an assist.

The Egyptian impressed for Liverpool in the 5-1 away win at Porto, Salah scored twice in the game.

Federico Chiesa was solid against Chelsea helping the Old Lady's second a 1-0 victory over Chelsea. He scored the only goal of the game.

The Senegalese put in an impressive performance for PSG against Manchester City. He opened score line with a well taken shot, he also made 8 recoveries, completed 3 successful tackles, 2 clearances and won 7 duels.

Leroy Sane impressed as Bayern Munich recorded a 5-0 win over Dynamo Kyiv. He scored a goal and assisted another.

German Youngster Karim Adeyemi was in solid form as Salzburg secured a 2-1 over Lille. He scored twice from the spot.

The Uruguayan put in a solid performance as Benfica defeated Barcelona 3-0 at the Estadio da Luz. Núñez scored twice in the game. 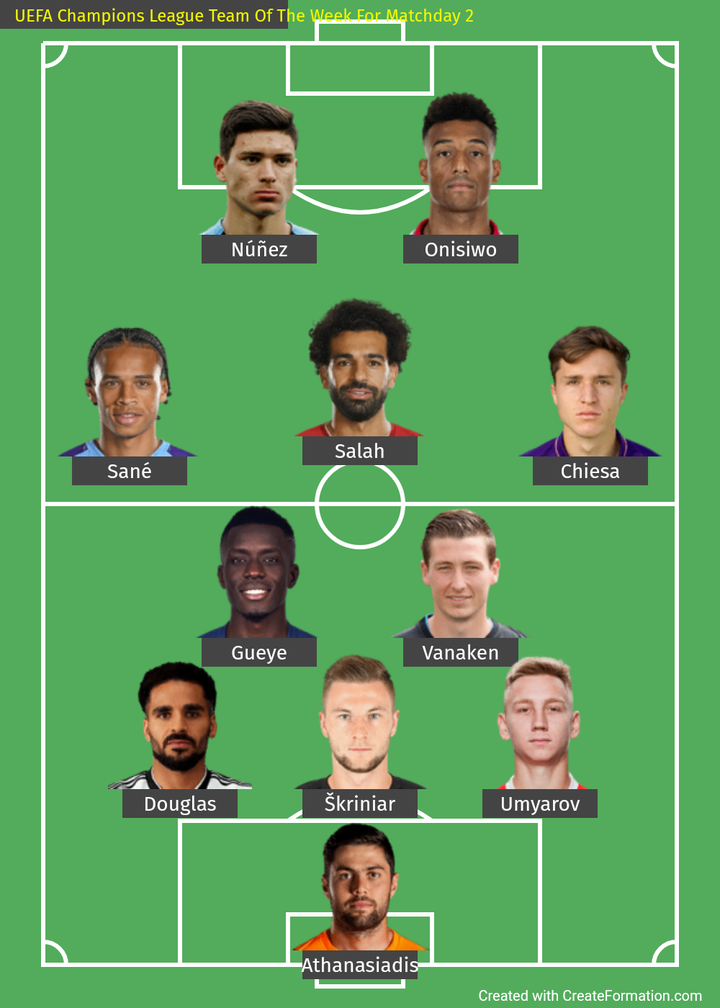