MNU VS VIL: 3 Manchester United Defenders That Could Miss The Villarreal Match

Manchester United will play their next Champions League game against Villarreal on Wednesday, after they lost against Young Boys in the first game.These are the three Manchester United defenders that could miss the game. 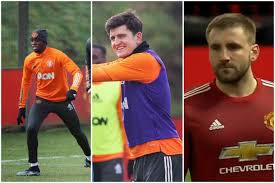 1. Maguire: Maguire was replaced by Lindelof after he suffered something that looked like a calf injury, and the manager does not even know whether he will be available against Villarreal. He is an important player and he will be a great loss to England and Manchester United. Villarreal strikers will find it easy in that game because of Lindelof. Bruno Fernandez might captain the side.

2. Shaw: He got himself injured against Aston Villa, and Manchester United will miss him on Wednesday. Shaw has been consistent since the beginning of the season, but yesterday he only played 28 minutes and he was substituted for Dalot. He could not perform like him. Manchester United plays through the wing and Villarreal will come after them. Although Telles is likely to make his second start of the season,

3. Wan-Bissaka: he will surely miss the game after he was given a red card against Young Boys, where Manchester lost to the Swiss club by 2 goals to 1. Aaron went for a lost ball and almost crushed the opponent's leg. Ole Gunnar already has a replacement for him and that is Dalot. The pressure is coming on the manager and he needs to win on Wednesday,if he wants to remain at the club.

The last time Manchester United met Villarreal, it ended in penalties, and United lost in their first final under Ole Gunnar. Will the manager get his revenge against Unai Emery's side? Villarreal had performed exceptionally well against English teams. They defeated Arsenal, Manchester United, and Chelsea, only beating them on penalties. Villarreal played a goalless draw against Real Madrid and they could surprise the world on Wednesday.