My goal is world number one, says Briton

Britain's Cameron Norrie has aimed at the number one spot of the ATP rankings, not bothered about the hurdles he will cross, as he prepares to make exploits in the French Open. 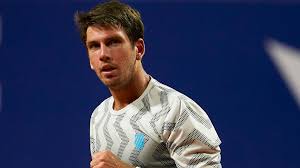 The British number has been active since the turn of the year, putting some top performances at the Maimi Open, Italian Open among others. His recent display was at the final of Lyon Open where he met Stefanos Tsitsipas, but he could not print past the Greek.

But Norrie is not bothered by his 41st position in the ATP Rankings, and behind Daniel Evans, putting planning to be the world best tennis player one day

"I'm not too bothered about it," said Norrie. "I'm happy to keep doing my thing and let those things take care of themselves. The goal is world number one, not British number one," he said firmly

However, the French Open has not been fair to the Britons, but  Norrie heads to the tournament as one most in-form players.

Norrie has advanced to two ATP Tour finals in Estoril and Lyon and claimed the major win of his career over Dominic Thiem in the second round in Paris.

"When I'm moving well and I can make the points physical and tough in the lungs a little bit, the rallies get longer and longer, I think it's always in my favour," the 25-year-old player said.

He said clay is one of his best surfaces, but he could some other things on other surfaces of the court.

"Clay could be my best surface but I think I'm doing a lot of other things well that can benefit me on other surfaces as well. I think I'm serving well and hitting the spots well in big moments," he said

"All those other things are allowing me to have my best chances on the clay. I think the biggest thing is I'm just enjoying the tennis and enjoying the matches and the battles I've been having." he ended