David De Gea credential was been called into question after a high profile against Chelsea. 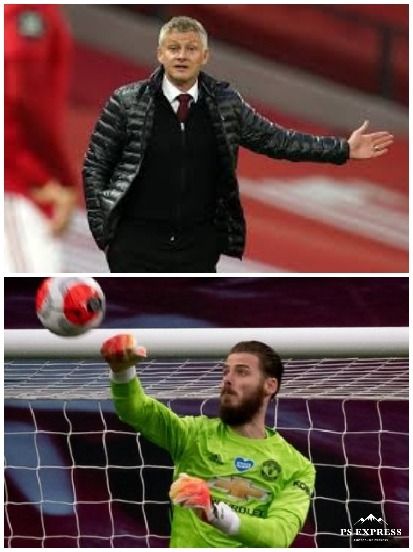 De Gea was responsible for United 1-1 draw against Tottenham Hotspur, when he fumbled with a shot from Steven Bergwijn. Even before that recent error at Spurs, the Spain international was responsible for Dominic Calvert-Lewin's goal in the 1-1 draw at Everton, dawdling over a clearance before hitting it against the striker. There was another lapse in the 2-0 loss at Watford in December when he allowed Ismaila Sarr's shot to slip into the net.

The most recent of it all is against Chelsea deep into half time stoppage time when, Chelsea launched a last counter attack when Oliver Giroud near post flick was left into the back of the net. De Gea's second error, moments into the second half, was even more disturbing because Mason Mount's shot was a routine low affair from 20 yards, hardly a blockbuster. And yet United's keeper somehow allowed it to escape his grasp after getting both hands to it. It was a failure of concentration and technique.

United left back Brandon Williams was at fault for giving the ball away to Mason Mount, but De Gea was largely to be blame.

United second keeper Sergio Romero is mostly preferable in the competition to De Gea, who last played in the fa cup final match against Chelsea, whome the lost 1-0.

De Gea was selected because it was a big game but he let his manager down. After the game United coach Ole Gunnar Solskjear called his keeper the best in the world and in the league.

The Spanish goalkeeper is on a declined an there is a rapid need for a change, given the rapid development of United keeper Jordan Henderson who is on loan at Sheffield United. The England international 23, is gaining a lot of vital experience from Chris Wilder is been regarded as United future keeper, due to he consistent level of performance this campaign.

Solskjaer who is building a United side with a potent attack and a developing midfield but a serious questions now surround the failing keeper who has been inconsistent this season.

De Gea who signed a lucrative deal in September 2019,that will keep him at Old Trafford till 2023.Solskjaer have to provide competition for the Spanish come next season, if any hope of silverware.

United fans what do you think, should De Gea be replace or should Solskjear continue keeping faith in him. Drop your comment below and hit the like button for more news on United.