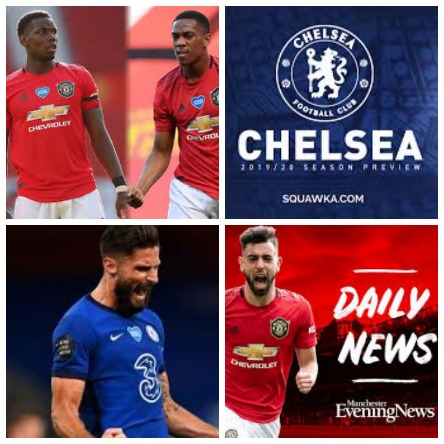 It has been an Interesting Premier League season, as the League is about to come to an end, after all Leagues around the world where placed on suspension due to the Lockdown.

The resumption of the League as well Has The Premier League, actually tune down on the anxiety that came with the pandemic.

Okay! No need For Long talks, as we can all testify to how beautiful, The after lockdown Premier League matches has been since it resumed.

Back to why you have all Clicked this Article. The Permutations. Why Manchester United Will Finish in Third place ahead of Chelsea despite being 4 point behind as at result of the last match played between Chelsea and Norwich which ended in favor of the blues Courtesy of a lone goal from Former Arsenal Striker Oliver giroud.

Here are The 3 Reasons.

Chelsea has two big fixtures ahead of them, One against Liverpool and the other against Manchester United.

Against Liverpool the blues have lost 2 of their last five Premier League fixtures, drawn 2 and won 1, Liverpool will be looking to finish the league in style and what better way than to beat of your fiercest rival to cap your glorious triumph,

Manchester United, we can say Has 6 points in the bag Against Crystal palace and West Ham United.

First, Crystal palace has managed to pick 4 point from a possible 27 in the last 9 Premier League matches against Manchester United, with 1 win 1 draw and 7 loss, with their only win coming in their 1-2 Away at Old Trafford, with Crystal palace sitting in 14 place, They will be resting Their top players ahead of their next game with fellow mid table team Wolves, where they stand a chance of cementing their place in the Premier League for next season.

On the other hand West ham might be on fire at the moment with Antonio banging in the goals for all corners, but the trip to Old Trafford will end in favor of The Home team just as History has always done, West Ham United have not won a single of it last 10 trips to old Trafford in all competition, grabbing just 3 Draws, Two in the Premier League and one in the FA Cup.

With West Ham sitting in 16 position with 9 win 7 draws and 19 loss. The Red Devil's have the 3 points in the bag.

The final league Match for both Manchester United and Chelsea against Leicester City and Wolves.

Let's look at The match between Wolves and Chelsea, In their last five Premier League Matches Chelsea has won 3 lost 1 and draw 1, despite having one of the fiercest defense in the Premier League, the team that currently occupies 6th place will be looking to finish strongly Chelsea and hold strongly to their 6 position. They will be looking forward to a draw, but will be an easy pie for Chelsea who will come home with the 3 point.

Chelsea will only manage 3 points from their next 2 games against Liverpool and Wolves.

Manchester United, Will pick up 7points,Topping Chelsea on better Goal difference or Head to Head. If they end up having 66 point apiece.