Who Is The Better Midfielder Between Ozil And Rodriguez? Check Their Stats

This post is about two of the great midfielders in the world, James Rodriguez and Mesut Ozil. Both have played in more than two teams, and their statistics for all the games played in each team will be discussed here.

Starting with, Rodriguez whose full name is James David Rodriguez, born on 12th of July, 1991, 29 year old, citizen of Colombia, and all time Midfielder.

He started his football career at Monaco, played 34 matches in total in 1803 total minutes played, scored 8 goals, and 12 assists.

James later joined Porto, played a total of 26 matches in 961 minutes of play, had 3 goals, and 5 assists.

Finally, James moved to his current club, Bayern Munich which he played 60 matches in 2392 minutes of play, scored 15 goals, and 15 assists in total.

James Rodriguez in his football career presently have played a total of 388 matches, scored a total of 104 goals, and 124 assists in total, including his matches for his country.

He started his career at FC Shalke O4, which he played a total of 16 matches with no goal, and no assist in his 566 minutes of play at Shalke O4.

Ozil moved to Werder Bremen, in Germany Bundesliga which he played a total of 90 matches with 5483 minutes of play, scored 13 goals, and 13 assists in total.

He later moved to Real Madrid, also played as a midfielder, which he played a total of 147 matches with 5824 minutes of play in Madrid, scored 25 goals, and 60 assists in total.

Mesut Ozil's current club, Arsenal where he has made a positive impact, and a brilliant performance. In Arsenal this far, Ozil has played 254 matches in total, scored 44 goals, and 72 assists in total.

In his career, including his matches, goals, and assists for his country, Germany, he has currently played a total of 600 matches, scored 105 goals, and 216 assists in total.

In summary, see the picture below: 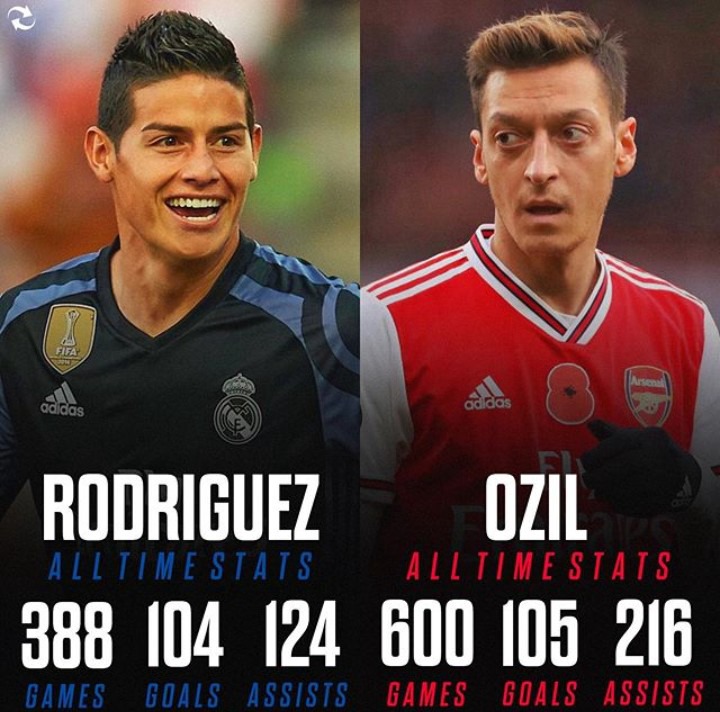 So, Rodriguez or Ozil?.

Content created and supplied by: Feranmi1028 (via Opera News )