Liverpool Star Goalkeeper Facing Up To 6 Weeks With Injury

By Froshniggar (self media writer) | 1 year ago

Liverpool Manager Jurgen Klopp made it known that Goalkeeper Alissson, will not play for four to six weeks due to the injury he is having on his shoulder. 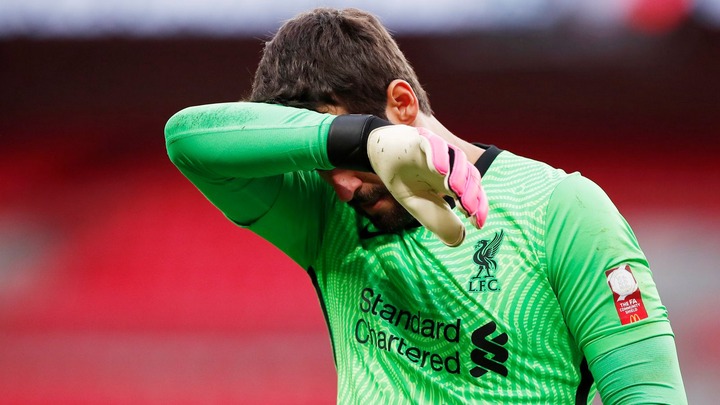 Jurgen Klopp had to use his first-Choicw goal keeper,Adrian, who played on Sundays Night in the 7-2 premier League defeat from Aston Villa.

The mighty Reds CEO disclosed after the Marc that Alisson is not fit to participate yet and he won't be able to face Everton in the Merseyside derby on October 17, which is Liverpool’s first game after the international break.

Brazil international Alisson has been a essential figure for Liverpool since he was transferred from Roma in the summer of 2018.

When he was Asked when the 28-year-old might return, Klopp said: “No chance to play against Everton.

“Let me say, it could have been worse with that injury, that’s for sure.

“I don’t want to put a timeframe on it but four weeks could be possible, six weeks is maybe more likely, but I don’t know.

“We have to assess this thing.”

Alisson Ramses Becker, commonly known as Alisson, is a Brazilian professional footballer who plays as a goalkeeper for Premier League club Liverpool and the Brazil national team. In 2019 he was named The Best FIFA Goalkeeper and was also the recipient of the inaugural Yashin Trophy.

Content created and supplied by: Froshniggar (via Opera News )