By Snow (self meida writer) | 1 years

West Ham want Hertha Berlin forward Salomon Kalou to bolster their attack for the second half of the season.

West Ham have targeted Salomon Kalou in a late January transfer window raid on Hertha Berlin as David Moyes looks to bolster his attack for the second half of the season. The Hammers’ 2-0 defeat to Liverpool on Wednesday night left them lingering down in 17th and with a battle to avoid relegation on their hands.

Moyes desperately needs some firepower to help blast his flagging side up the table, with just goal difference keeping them above Bournemouth, who join Watford and Norwich in the drop zone.

German outlet Kicker report West Ham have now made an approach for Kalou as Krzysztof Piatek, who Moyes looked at earlier this month, closes in on a move to the Olympic Stadium.

Kalou is best known in the UK for his six-year stint at Chelsea, during which he won the Premier League, the Champions League, the FA Cup four times, the League Cup and the Community Shield.

Moyes apparently sees the Ivory Coast international as the man to come in and give his faltering frontline a boost, with £45m Sebastian Haller so far failing to justify his mammoth price tag. 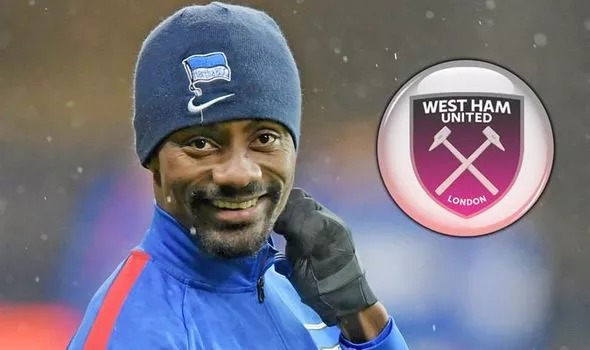 Kalou has made just seven appearances in all competitions for Hertha this season, scoring two goals in the process for the Bundesliga’s 13th-place side. And the 34-year-old might fancy the chance to breathe some life into his flagging career, particularly with Piatek’s imminent arrival set to push him further to the fringes. Piatek rebuffed West Ham’s advances earlier this month because he wants to join a more high-profile team as he edges closer to the exit door at AC Milan. Chelsea and Tottenham had emerged as potential options for the Pole, however, Milan’s insistence on a permanent deal led to Hertha emerging as his next landing spot.

Hertha are planning to cough up an initial fee of £19m (€23m) for Piatek and may be able to boost their coffers by bringing in a fee from West Ham for Kalou. Asked about the potential for any more incoming after the defeat to Liverpool, Moyes said: "I've not been off the phone for two weeks. We are trying but I can't make any promises." Pressed on Tomas Soucek’s arrival, which was sealed on Wednesday, Moyes added: "It is difficult to know what to expect but he is a big athletic midfield player, who has scored a lot of goals. An international and we have someone who can play in a couple of different roles.

Content created and supplied by: Snow (via Opera News )