By Mj_Sekani (self meida writer) | 9 months 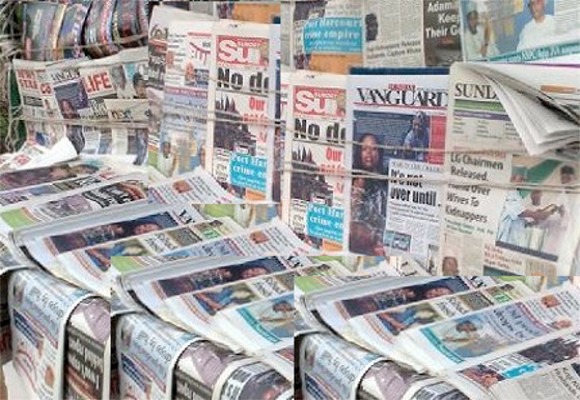 Good morning Nigeria,welcome to the roundup of newspaper headlines in Nigeria for today Sunday,9th August 2020.

Vice-President Yemi Osinbajo and the Chief Justice of Nigeria (CJN), Justice Ibrahim Muhammad, were among other leaders who Saturday advocated new reforms in the judiciary, particularly as it pertains to the appointment of judges.

The leaders, who spoke at a webinar organised by the Justice Research Institute, said the reforms have become necessary in order to restore the honour and dignity of the judiciary and judges lost to the manipulation of politicians and various sectional interests in the country.

All those who spoke agreed that the integrity of the judicial system is central to the country’s democracy because the courts decide who is properly elected or not. They noted that when people lose faith in the judicial system, they have no choice but to resort to self help.

Senator Buruji Kashamu, who represented Ogun East in the 8th National Assembly, is dead. He was aged 62.

He died on Saturday in a Lagos hospital where he had been receiving treatment. He was said to have died of COVID-19 complications.

His death was announced by one of his former colleagues in the 8th National Assembly, Senator Ben Murray-Bruce, through his verified twitter handle.

The Management of the Ekiti State University, has warned admission seekers to be wary of the activities of scammers who were desperate to defraud unsuspecting members of the public under the pretext of fake advertisement by the university.

The university disowned the online advertisement claiming that the UTME/ Direct Entry admission form for the 2020/2021 session was out, describing this as handiwork of admission scammers.

The warning was contained in a statement made available to Journalists in Ado Ekiti, on Saturday, by the institution’s Head, Directorate of Information and Corporate Affairs, Bode Olofinmuagun .

“Management of Ekiti State University wishes to disclaim the online advertisement as it did not emanate from the authorities of the university”. The university urged parents and particularly candidates to be wary of these scammers who are only out to dupe them.

4. South Should Produce Next President - El-Rufa'l.

Barely a week after President Muhammadu Buhari’s closest ally and nephew, Malam Mamman Daura spoke against zoning of presidency ahead of the 2023 election, Kaduna Governor Nasir El-Rufa’i has said the next President should come from the South.

He also denied nursing any presidential ambition, saying he does not want to be President. El-Rufa’i stated these in an interview with the Hausa service of the BBC monitored by our correspondent in Kaduna on Saturday.

The Governor noted though the arrangement to zone or rotate presidency among the various regions of Nigeria is unconstitutional, it is a gentleman political accord that must be respected by the two regions.

According to him: “The southern part of the country is supposed to produce the president come 2023. “I don’t support a northerner to vie for the seat after President Muhammadu Buhari, based on Nigeria’s political arrangement.

Juventus have named Andrea Pirlo as new head coach on a two-year contract just hours after sacking Maurizio Sarri. Pirlo was only named the club’s Under-23 head coach last month but has secured a major promotion before even taking charge of one match with the Serie outfit.

It will be a major challenge for the 41-year-old who has never managed before, either at youth or senior level.

Pirlo will take over a team that has won nine consecutive Serie A titles but has continued to fall short in the Champions League. Sarri was sacked after just one season despite winning the Scudetto at the first time of asking.

Juventus were shockingly eliminated by Lyon in the Champions League last 16 on Friday as a 2-1 victory over the Ligue 1 side was not enough to avoid an exit on away goals in a 2-2 aggregate final score.

A former Minister of Communication, Adebayo Shittu, says former Governor Adebayo Alao-Akala of Oyo State is not qualified to lead the reconciliation of the aggrieved members of the All Progressives Congress in the state.

Shittu, who had a sharp disagreement with Ajimobi while he was governor, said there was no way the Unity Forum which he belonged to would be fairly treated if the reconciliation committee set up by Ajimobi was allowed to do the job.

He said, it is like parties that have a case and they are supposed to go to a judge who is impartial, who is not interested in the matter. If a party in a case has to go before a judge who perhaps belongs to one of the two groups, there won’t be fairness.

The chairman, Edo Campaign Council, who was a former PDP chairman in the state, said the people of the state would resist any interference from the former Lagos State governor.

Orbih said this at a Press conference on Saturday in response to allegations made by Tinubu against the PDP candidate in the September 19 election, Governor Godwin Obaseki.

The governorship election is about five weeks away, but the political climate in the state is heating up, with the players engaging in verbal attacks. Obaseki, who is seeking reelection, will face APC candidate, Osagie Ize-Iyamu.

The Senate President, Ahmed Lawan, on Saturday, in Gashua, Bade Local Government Area, sponsored the wedding of 100 less-privileged spinsters, while 200 more are in line to benefit. The beneficiaries were drawn from Bade and Jakusko Local Government areas.

Lawan, represented at the ceremony by the Speaker, Yobe State House of Assembly, Alhaji Ahmed Mirwa, said the gesture was in aid of parents who could not shoulder the financial burden involved.

He said the exercise would also discourage social vices such as rape, child abuse, and child abandonment, among others.

The Senate President promised that 200 other spinsters would benefit from similar exercise in the remaining four local government areas of his constituency, Yobe North Senatorial District.

Lionel Messi was in fine form as Barcelona progressed to the Champions League quarter-finals, with a 3-1 second-leg defeat of Napoli sealing a 4-2 aggregate victory.

An action-packed first half at Camp Nou saw Barca take a three-goal lead, before Lorenzo Insigne pulled one back from the spot in stoppage time.

Clement Lenglet’s ninth-minute header broke the deadlock, with Messi netting an exquisite second prior to winning a penalty which Luis Suarez converted.

It appeared Barca had gone 3-0 up by the half-hour mark, only for Messi to have a second goal ruled out for handball, yet Barca had their third when Suarez scored from the spot after Kalidou Koulibaly clumsily kicked Messi.

Okorodudu, who had attended the State People Democratic Party, PDP, Congress in Asaba was kidnapped while being driven home by his driver. The kidnappers reportedly attacked the Delta LG chairman and his driver along Mbiaku Link Road in Warri GRA at about 5:43pm

They were just returning from Asaba where he had attended the State party congress when the gunmen attacked his vehicle along Mbiaku Link Road in Warri GRA, the driver was shot before he was taken away, as we speak to you, the driver is receiving treatment at an undisclosed hospital.

The source said though those who took him away are yet to reach out to the family members “we pray they bring him back to us safely.