The match was a literal 'war' between the two teams, with all eight women leaving it all in the ring. One of the highlights of the match saw the return of Shotzi Blackheart's beloved tank in a new avatar. 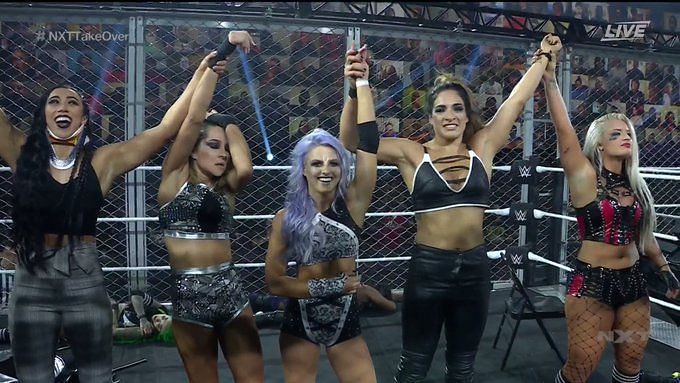 he first two women to enter the ring were none other than  Ember Moon  and  Dakota Kai . Both of them have been having a heated rivalry and this translated into the match-up at NXT TakeOver: WarGames.

Kai and Moon both traded blows against each other, but it was Shotzi Blackheart who would enter the ring next for her team.

However, the advantage for Team Shotzi would not last for long, as Team Candice would send out Raquel Gonzalez as an equalizer, turning the tide in their favor. The chemistry and teamwork between Raquel and Kai would shift the tide back in Team Candice's favor.

Things really started heating up when the next member of Team Shotzi entered the ring when Rhea Ripley and Raquel Gonzalez faced off at TakeOver: WarGames.

It was a hard-hitting match up between the two, but things would end up in the favor of Team Candice once again with the inclusion of Toni Storm. At this point, the weapons would truly come into play as LeRae and Co. took advantage.

The final member of Team Shotzi to enter the ring would have been Io Shirai. However, some interference with the cage door by Raquel Gonzalez and Toni Storm prevented that from happening.

The NXT Women's Champion's entrance was further impeded when Candice Le Rae attempted to enter the match but was stopped by Shirai. This didn't end well for Shirai, as LeRae's close friend Indi Hartwell would interfere and attack from behind.

This would give Team Candice an advantage over Team Shotzi, as it was a four-on-three Handicap match at that moment. Candice Le Rae did not seem to understand the rules and went for a pin on Shotzi Blackheart, not realizing that all members from both teams need to be in the ring for WarGames to start. It was at this point, that Io Shirai made one of the greatest entrances in WarGames history.

The match between Team Shotzi and Team Candice would then officially begin, resulting in some amazing spots and moves being exchanged between the two teams. This included an amazing Eclipse from Ember Moon to Dakota Kai onto some steel chairs at TakeOver: WarGames.

Although things were finally looking good for Team Shotzi, it would not end well. After a brutal exchange between both sets of women, Io Shirai would attempt to perform a maneuver on Raquel Gonzalez onto a ladder placed between the two rings.

Gonzalez's strength would prove too much for Shirai, as she planted the NXT Women's Champion onto the ladder, breaking it in the process and pinning her, giving the victory to Team Candice at TakeOver: WarGames.

This victory for Team Candice would make team captain Candice Le Rae undefeated at NXT TakeOver: WarGames. However, the MVP of the match was none other than Raquel Gonzalez, after she pinned the champion. She definitely raised some eyebrows and could be next in line for a title shot.