Sergi Puig: It hurt that Barcelona didn't let me play in the playoff

By Ifedon (self media writer) | 1 year ago 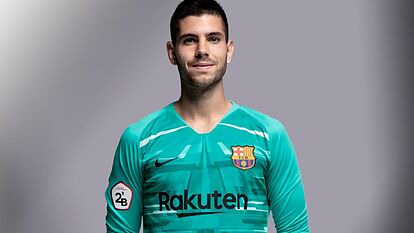 Barcelona announced that the contracts of Kike Saverio, Guillem Jaime and Sergi Puig will not be renewed, thus bringing to an end their stay at the Catalan club, however the latter has made clear that it hurt to not be allowed to partake in the playoff.

Barcelona B 's season hasn't yet ended and they are due to play in a promotion playoff against Real Valladolid's youth team on Sunday.

Puig was not given the chance to play due to the presence of Lazar Carevic and Arnau Tenas, despite previously having the confidence of the coaching team of

Q: How are you spending your first days outside of Barcelona seven years after you joined?

A: "These are days of heavy reflection, of evaluating everything that you have lived through over these years, but now it's time to look to the future."

Q: Is your immediate future is already decided?

A: "Nothing is certain yet, I am evaluating different options. My goal is to reach professional football, so I'm looking for a team with aspirations that I can contribute to."

Q: During your seven-year spell at La Masia, did you already consider the possibility of having to look for a club outside Barcelona in the future, especially as it's so hard for goalkeepers to break into the team?

A: "Yes, you have to be aware of the difficulty of reaching the senior team, but you make forward steps and you don't think about anything else. I saw myself looking at a goalkeeper like Jordi Masip who was growing without much attention, and he went to have a career with Real Valladolid in LaLiga Santander."

Q: Was your best season at Barcelona with Gabri's Juvenil A, when you played a lot and reached the semi-final of the UEFA Youth League.

A: "The figure of Gabri gave me the confidence I needed at that time and I had the necessary minutes to settle into a position and be a reliable goalkeeper. Since then I believe I gave improved in all aspects of the game, even though I didn't have as many minutes as I did then."

Q: Did you expect to play more?

A: "Obviously you always want to play more and I think there have been times where I deserved more minutes than I got. It's always known at Barcelona that it's difficult to play a lot of matches, but I'm very proud of the games I played in."

Q: You explained that your coach, Garcia Pimienta, and the goalkeeping coach, Busquets, were confident in your quality, but what are the aspects which you didn't like for a renewal?

A: "They sent me an offer, but I realised that there were players were ahead of me. I saw that Lazar Carevic and Arnau Tena got offers before I did. I could have stayed but I wouldn't have played any more minutes than this year."

Q: Did you feel undervalued?

A: "I am very grateful for the trust and support I have had from Pimienta and Busquets, who have been by my side since day one. However, it's at boardroom level, the people who don't know names, have very different opinions."

Q: Were you presented with a contract extension from June 30 to play in the promotion playoff?

A: "I was given a renewal proposal that included the playoff month, but I asked to wait until after the playoff to negotiate as I totally wanted to be involved. The entire coaching staff knew this, but in the end the club told me that if I didn't sign the long-term extension then I wouldn't be able to play in the playoff."

A: "It is the bitter moment of this season, the decision the club has made has hurt me. The idea was to play the playoff and then see what happened." Barcelona • Will not have his contract renewed

Sergi Puig: It hurt that Barcelona didn't let me play in the playoff

Content created and supplied by: Ifedon (via Opera News )