By Godfather01 (self media writer) | 1 year ago 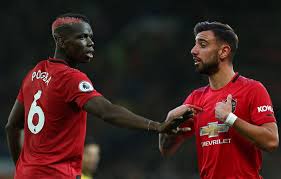 Manchester United return to Premier League action as they travel to the Hawthorns to face West Bromwich Albion. Ole Gunnar Solskjaer’s side beat West Ham United in the Emirates FA Cup on Tuesday evening and a 1-0 victory in which the only goal of the match was scored seven minutes into the first period of extra time. Scott McTominay was the scorer of the goal, reaching seven goals for this club this season. United currently sit in second place in the Premier League this season but with Manchester City, Leicester City and Liverpool (the latter two facing each other) all play before United do on Sunday, so their position could change, if Leicester beat Liverpool, which is a distinct possibility at this stage of the season.

Sam Allardyce’s side are in dire straits at this stage of the season, sitting in 19th place, a point ahead of Sheffield United at rock bottom and three points behind 18th placed Fulham. The Baggies are currently 11 points from safety, which could increase this weekend if they do not get a favourable result against United. Even if they do beat United, they will be no better off if Fulham beat Everton and the fact that Burnley, who are 17th, sit 11 points clear of them, should they beat Crystal Palace in the 3pm kick off on Saturday, it will mean that 11 points still separate them from safety. If United beat the Baggies again and Burnley win, the 11 points will turn into 14 and become more problematic for Allardyce’s side this season.

Top Scorers: The Baggies have scored 24 goals in all competitions this season with Bruno Fernandes (18) and Marcus Rashford (16) outscoring the club. United should be seeking to overthrow their opposition easily to keep them struggling for Premier League survival this season.

In the last six matches, United have won three, drawn twice and lost once. Solskjaer’s side have scored 17 goals, conceding seven and keeping three clean sheets. The 9-0 victory over Southampton is the reason why United have increased their goal tally in the past six matches, which is an anomaly based on the other matches which have been played. That said, United go into this match in good form, defeated in only one match and having an unbeaten record on the road, which has broken an old record. Solskjaer’s side should be seeking to breakdown their opposition as soon as possible and playing for the victory. The two hours they played against West Ham United on Tuesday might be costly with players being rested for the match and having to be used.

The Baggies are inn dire form at this stage of the season. In their last six matches, they have won once, drawn once and lost four times. Allardyce’s side have scored seven goals, conceded 15 and kept no clean sheets. With the team in 19th place in the Premier League table right now and 11 points from safety, if they are unable to beat United and Burnley beat Crystal Palace, which is played at 3pm on Saturday, it could leave the Baggies with 14 points to make up to get out of the bottom three, which is going to put pressure on Allardyce and his squad. It does not look good for their survival in the Premier League this season, which will be a shame for them. I won’t feel sorry for them though. They only have themselves to blame.

Phil Jones (knee) and Paul Pogba (thigh) are the only two players on the sidelines for United through injury. Amad Diallo was missing from the U23’s on Friday evening because of illness, which if he recovers in time for Sunday could see him in contention to feature for Solskjaer’s side after appearing in the bench in the 1-0 extra time victory over West Ham United on Tuesday evening. Eric Bailly, who has been missing for the past two matches, could be back in action this weekend, which will be good news for Solskjaer, who has seen his defence play poorly of late, especially in the 3-3 draw with Everton in the Premier League last weekend. Aside of the injuries, Solskjaer’s side will have a relatively full squad for this match.

Grady Diangana (thigh) has a 25% chance of being involved in the clash with United on Sunday afternoon. His participation will be decided after a late fitness test, which may seem unlikely for the player. The Baggies will need to get a good result in this match to have a chance of clawing back an 11-point deficit between them in 19th place and Burnley in 17th place in the Premier League table. However, with Burnley playing on Saturday, facing Crystal Palace, it could be a 14-point deficit by the time the match kicks off on Sunday afternoon between the Baggies and United. Allardyce will have a big job one his hands to try and steer this team away from the relegation zone this season, which seems unlikely at this stage of the season.

Predicted Starting XI: Edinson Cavani to lead the line against the Baggies? Bruno Fernandes to continue his goal/assist run which has changed United’s fortunes since his arrival? Amad Diallo to recover from illness to feature on the bench against the Baggies?

Solskjaer will be seeking to restore Edinson Cavani to the starting XI against the Baggies with him being the best striker at the club at this period of time. I think there could be a two-man forward formation which should consist of Mason Greenwood as Cavani’s partner. Bruno Fernandes will play in the advanced midfield position inn this formation with a three-man midfield of Scott McTominay, Fred and Donny van de Beek. In defence, Aaron Wan-Bissaka and Luke Shaw will play in the fullback roles with Eric Bailly and Harry Maguire partnering in the central defensive area. David De Gea will be recalled after being rested in the Emirate FA Cup on Tuesday evening, which should have given him some time to recover from that 3-3 draw with Everton.

Match Prediction: 25 Premier League matches between United and the Baggies with United winning 16 times, drawing five times and losing four times. Solskjaer’s side should be seeking to add more misery to Allardyce’s side this season.

In their last visit to the Hawthorns, which was on the 17 December 2017, United won 2-1 with Romelu Lukaku opening the scoring in the 27th minute and Jesse Lingard doubling the lead in the 35th minute. Gareth Barry scored a consolation for the Baggies in the 77th minute of the match. At Old Trafford that season, which was played on the 15 April 2018, United were beaten 1-0 with a solo Jay Rodriguez strike in the 73rd minute of the match. United did beat the Baggies 1-0 earlier this season and it was a dire match in which Bruno Fernandes’ penalty was the only real highlight of the match. Sam Allardyce’s side have found themselves in a dire situation this season, which United should aim to keep going for them, getting the win away from home