Players who can NEVER play together

Football is a game that has brought millions of people together. It is the most played, watched and a global sport in earth.

For some reason, the world of football is also filled with conflicts and hatred.

Some players are renowned for their temperament and controversy on and off the pitch. Also some players are mentioned here only because of their rivalries not hatred. Don't be surprised if you see teammates on the list, because they can never play together again.

Before I get ahead of myself, let's explore and read about these players. 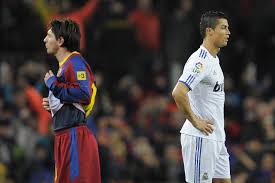 Like it or not, these two are the greatest footballers of all time.

They are football rivals. Each trying to overtake another.

They both have been improving from time to time. Also improving their games.

It's apparent these two can never play in the same team. I guess you are wondering why.

This is because they are rivals and can NEVER be satisfied with one another on the same team. Think of it, when it comes to taking freekicks, they'll debate on whom to take it. What about penalty and giving assists to each other especially when they are hungrily chasing each others goal record?

Another thing is that Ronaldo is often portrayed as the arrogant one having interest in the rivalry and Messi is the exact opposite. Both have won the Ballon D'ors 5 and 6 times respectively. Ronaldo has also played in three leagues and have been successfully anywhere he played in the world. 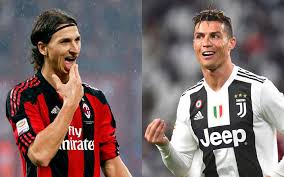 We all know that this boastful Swede is always beefing Ronaldo. Finding faults in whatever Ronaldo does. On the other hand, Ronaldo doesn't seem to care about Zlatan's sheepish act.

When Sweden lost to Portugal and failed to qualify for the world cup, he said a world cup without him is nothing to watch.

He's very controversial with his mouth. When Ronaldo scored an acrobat, he said let's see if he can score it from 40 meters.

It's the same Zlatan that returned to AC Milan this season wearing shirt number 21(which he said means is three times greater than 7). Meaning he is greater than Ronaldo thrice.

He always finds joy in rubbing Ronaldo in trash. Even though he isn't at his standard.

Zlatan has no Champions League or Balon D'or to his name, but he would have received many if there is Balon D'or for the most controversial player. 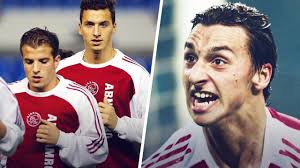 He appeared on the list again; that's Zlatan Ibrahimovic for you.

His lifestyle is interesting but on the pitch tends to make players see him red hot. Zlatan and Van Der Vaart were teammates at Ajax when their conflicts began, although it wasn't while playing for Ajax.

In a friendly match between Sweden and Holland, the Dutchman picked up an injury, which he believed Ibrahimovic has done on purpose, and told the press about it.

Once back at Ajax, the two came to a head, with Zlatan threatening to break both his legs. 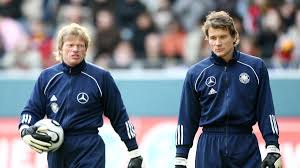 Oliver Kahn and Jens Lehmann were both great goalkeepers and teammates in the German national team. But for some reasons, Kahn is the first choice goalkeeper which doesn't seem to be a look away for the then Arsenal goalkeeper.

Lehmann couldn't complain about this, but when Jurgen Klinsman took over regime as the German national team manager in 2006, prior to the world cup, he took a different step. He declared that none of them would wear the number one shirt they would have to fight for the right to play.

Lehmann was happy about this while Kahn the opposite.

They both rivaled each other many times, with Lehmann claiming he plays well under pressure and that Kahn was too serious.

Kahn also mocked Lehmann when he was dropped for Manuel Almunia by Arsene Wenger. 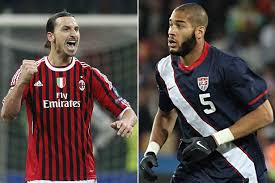 Ibrahimovic is much of an agitator than a football as he appeared on the list for the third time.

His feud and the greatest till date is with USMNT's powerful defender Oguchi Onyewu. The clash happened when they were both playing for AC Milan in November 2010. Both came into a serious clash in a training session which later appeared in the national headlines. Zlatan later revealed in his Autobiography, that Oguchi had been angered by the challenge he made to confront him, before things got ugly.

Oguchi looks like a heavyweight boxer- 6 foot 4 inches more like a footballer. But the Swede is not afraid to take him down. 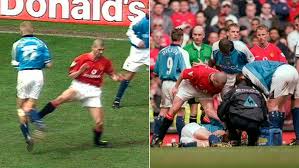 Roy Keane was one of the most fiery character in the premier league history. One could easily compile at least 10-12 players Roy Keane has fallen out with in the game.

His most abhorred and hatred-filled player is without a doubt Alf Inge Haaland.

The fued between them began in 1997 Haaland was playing for Leeds united, Keane had attempted to tackle and injure him. But he ended up injuring himself. With this Haaland felt he was feigning injury and trying to escape the referee's penalty for his act and chided him as he lay injured on the ground.

As it happened, Keane had injured his ACL, a serious injury for any footballer. He unfortunately had to stay out of action for over a year.

Keane then faced Haaland four years later, in 2001, this time he was playing for Manchester City. Keane made a horrific tackle on Haaland and this made the Norwegian retire in less than two years.

Keane later went on revealing that it was a payback and didn't regret his action. A very bitter hatred!!!