Apparently, France are the UEFA Nations League Champions, as they narrowly defeated Spain 2-1 tonight. Of course, the Luis Enrique men dazzled impressively throughout the 90 minutes, but the Spaniard manager was too quick with his substitutions, and that was what changed the game's tempo. Meanwhile, there are three France's players who are responsible for their massive victory against Spain. Frankly, the Luis Enrique men didn't make it look easy for their opponent, but these footballers below played with a high level of winning mentality, as they are now the Champions as regards the UEFA Nations League.

Obviously, most football fans believe France didn't deserve the trophy, because the Spanish players pressed them from the beginning of the match. However, these three players changed the match, as they didn't hold back in running back and forth to attack and defend. The Carlo Ancelloti's man literally gave France an equalizer, as he played a massive role in the frontline. Spain are quite balanced and composed at the back, with the likes of Eric Garcia, César Azpilicueta and the rest dazzled amazingly. Nevertheless, Karim Benzema pulled off an excellent performance, as he keeps scoring goals from unbelievable positions this season. Apparently, the match would have gone to extra-time if not for Karim's goal in the 66 minutes. As a result, the Real Madrid's goal-machine is amongst the players responsible for France's incredible victory, over Spain in the UEFA Nations League final. The PSG wizard made the match look a little bit entertaining, as he used his dribbling skills to enter Spain's defensive setup. Obviously, Mbappe gave the Les Blues a winning moment, as he registered 1 goal and 1 assist against the Luis Enrique men, which means he also played a big part in France's all-around performance tonight. Both Benzema and Kylian stirred up their winning spirits, immediately they noticed Spain weren't composed in the midfield, and they quickly utilized the opportunity to seal the match. Of course, Luis Enrique was very tactical tonight, but the Pochettino man actually found his way into his defensive lineup. 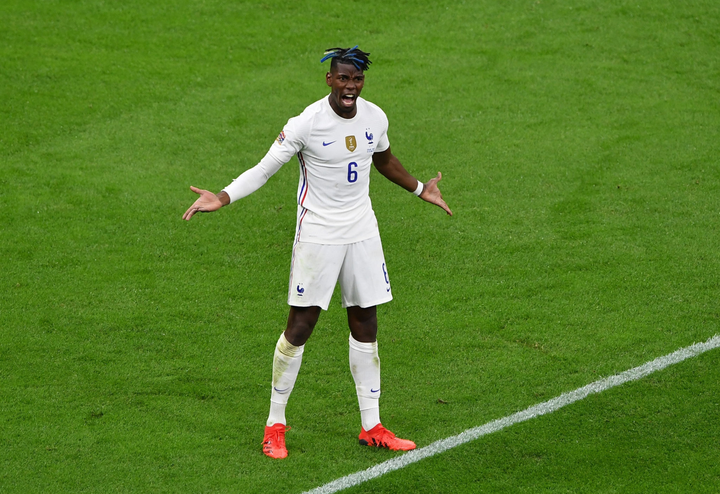 In all honesty, Barcelona Pablo Gavi didn't make it easy for the Manchester United midfielder tonight, as the youngster was everywhere in the midfield. Regardless, Paul Pogba delivered a MOTM performance, as he didn't allow the 17-year-old wizard to silence him. Literally, the Ole Gunnar Solskjær man controlled the midfield, even though it wasn't easy clashing against Sergio Busquets. The likes of Mbappe and Benzema wouldn't have scored if not for Pogba in the midfield, as he completed 6 dribbles, won 13 out of his 21 duels and 3 successful tackles. Without being sentimental, Paul was indeed a pillar for the Les Blues tonight.