UEL: Eden Dzeko Isn't A Threat For Manchester United Ahead Of The Semi-final Clash Tonight

By VlogMister (self meida writer) | 19 days

AS Roma visit Manchester United for their Semi-final game tonight at Old Trafford. As per the showdown at stretford ends, Manchester United would be looking onto AS Roma striker Eden Dzeko as a threat, but his purple patch in recent games is what could be use to determine if the Giallorossi Lupi frontman is going to cause trouble for Manchester United defence. 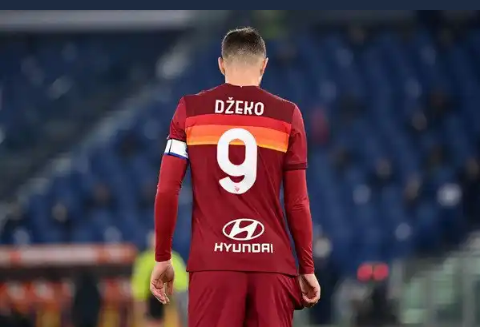 Arguably, Eden Dzeko is one of the deadliest striker in front of goal, and his ability to score from open play is what Manchester United would be wary of. But Man United backline would develop a way to stop the Giallorossi striker. Dzeko have now played 12 consecutive games without registering a single goal to his name, his longest drought in over a decade. Giving his recent stats, the Bosnia & Herzegovina striker would arguably be no threat for Manchester United defenders.

Undoubtedly, he's a prominent figure for AS Roma and could find a way of hurting Manchester United but looking from the other prospect, he is not in a fine form to cause trouble for Harry Maguire and co at the heart of Manchester United defence. Roma, in the other hand, have conceded the most goals out of all the teams in the top half of Serie A. Playing against an attacking force team like Manchester United, Roma would need to be more careful not to concede a lot of goals against the likes of Marcus Rashford, Edinson Cavani, and Mason Greenwood at United attack.

It going to be a tough game though, but the both side would be eager to secure a spot in the UEFA Europa League final this season. Manchester United are dreaming to play in their first official final under Ole Gunnar Solskjaer, but Roma as well would want to achieve same. So therefore, the game tonight would be a tough clash and hopefully it's going to be one for the moment for either Manchester United or AS Roma.

Your thoughts, who do you think would win tonight's game?

CHE 2-1 LEI: See What Rudiger Said After Chelsea's Victory At The Bridge

Chelsea vs Leicester City: Who have had the sweetest victory?